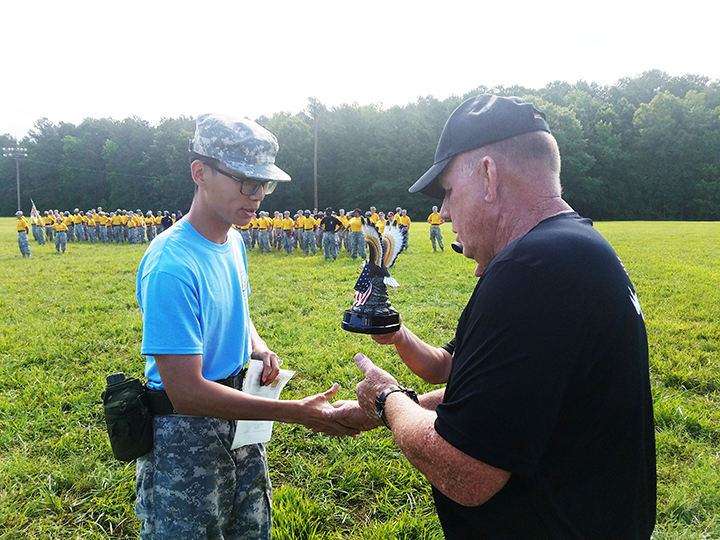 Fort Pickett, VA — For five days last week the air at Fort Pickett echoed with the motivated cheers of high school cadets from throughout Virginia and North Carolina.

The annual training event is designed to give JROTC cadets an opportunity to hone the skills they have acquired during the school year while meeting and interacting with like-minded young people from around the region.

Sponsored by US Army Cadet Command and supervised by retired US Army personnel (who now serve as JROTC instructors), JCLC Eagle focuses on the importance of teamwork and mutual respect in accomplishing a variety of tasks.

During a classroom session on Friday, Cadets were taught the basics of rocketry and each assembled their own small rocket. On Saturday they were treated to a demonstration by FMS’ own Rocket Club advisor, CPT Tom Galloway, and his colleagues from Virginia AeroSpace Team (VAST) after which each rocket built the previous day was fired as the Cadets cheered.

Fishburne Military School Cadet Quinten DeLorenzo, a rising Junior from Jefferson, Maine, said during Saturday’s Field Day events, “at first it sounded like it was going to be really tough based on what I had heard from others and it is a lot of work … but this has really been a lot of fun.”

Fishburne Military School Senior Army Instructor, LTC Robert Hunt, USA(Ret.), noted, “this is a tremendous opportunity for Cadets to grow stronger in their leadership skills while exploring new challenges and intermingling with students from other programs. It’s gratifying to see so many young people taking full advantage of this experience to build personal strength and integrity.”