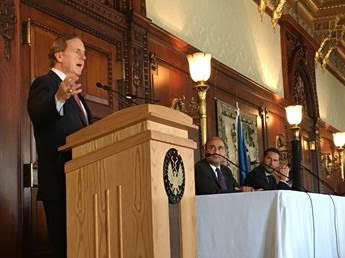 WASHINGTON – Reflecting a growing commitment to collaborate on efforts to defeat radical Islamist terrorism and combat threats from cyber and economic warfare, more than 120 Members of Parliament and other leaders from 40 nations joined Congressman Robert Pittenger (NC-09) for the 6th Parliamentary Intelligence-Security Forum at the Library of Congress on Wednesday.

“We gathered Members of Parliament from very diverse countries, with different styles of government, different views on the rule of law, and different religious backgrounds” said Congressman Pittenger, who organized and hosted the forum.  “Despite our differences, we have a common enemy in radical Islamist terrorism.  These forums build relationships allowing our countries to move forward together.”