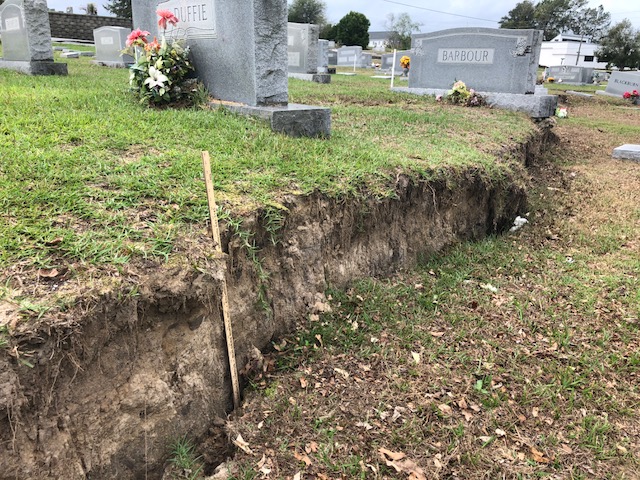 3 options for Cemetery damages in Elizabethtown 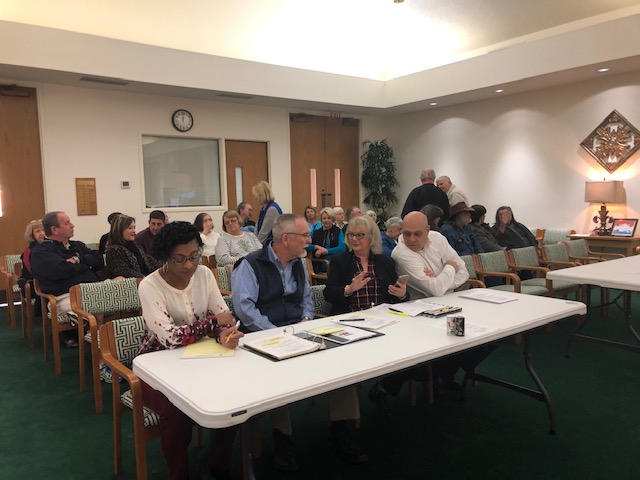 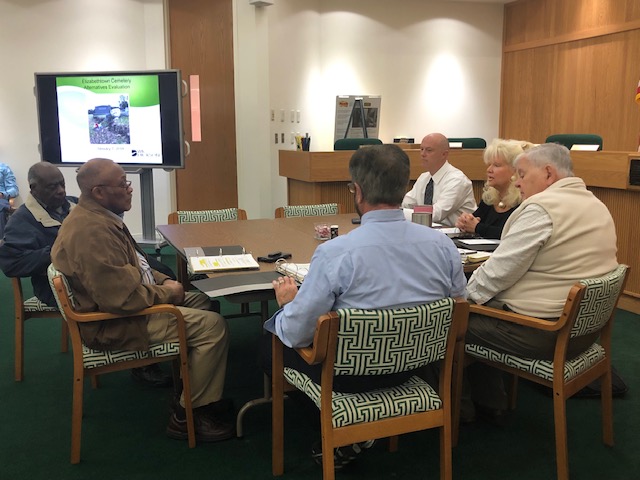 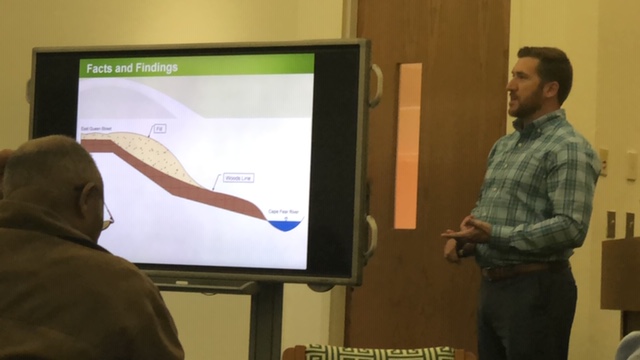 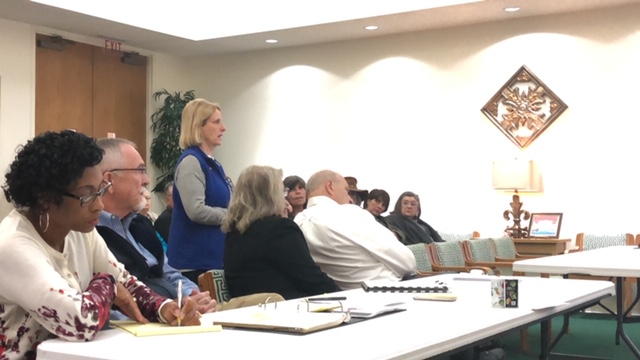 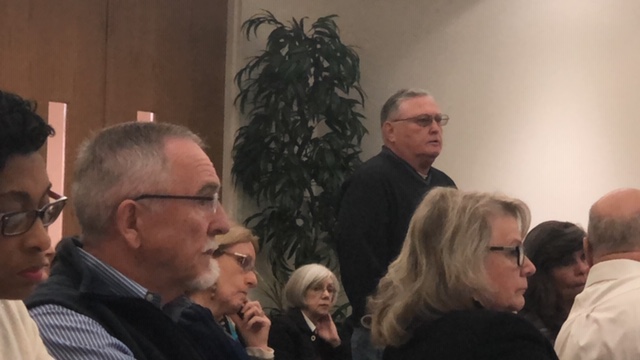 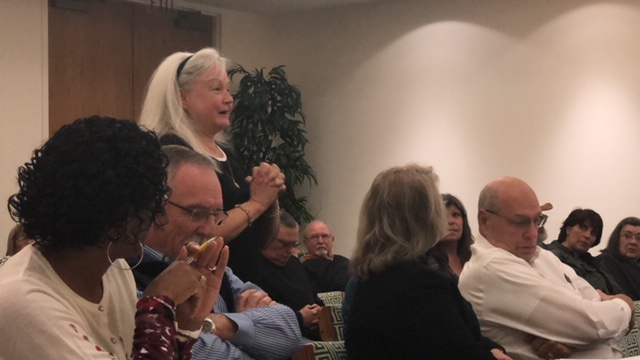 The Elizabethtown Town Council met in their noon work session on Monday. The council heard an update from Scott Sigmon, an engineer with W. K. Dickson and Associates, regarding the geologic damage to the City Cemetery. Many concerned citizens filled the Council chamber to hear the presentation and ask questions regarding the cemetery.

Mayor Sylvia Campbell welcomed those in attendance and stated the board is sensitive to the feelings of all of the families who have loved ones buried in the cemetery.

The town had soil samples taken in the fall of the damaged cemetery. The soil samples have revealed that the damage is caused by shifting soil, according to Sigmon.

“All of the borings show sandy soil is present,” said Sigmon. 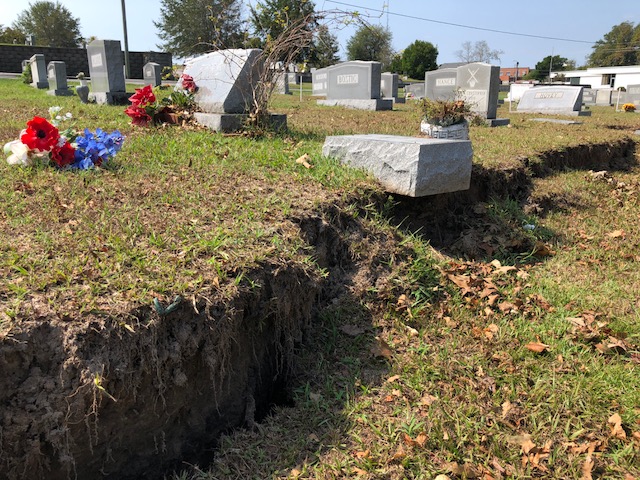 He explained that the cemetery is constructed adjacent to the site that was the former landfill; however, the landfill is not to blame for the movement. Sigmon said prior to Hurricane Matthew, no movement of the land at the cemetery was noticed.

He continued when the cemetery was created, the land was filled with a layer of sand rather than a clay-type soil. When the ground becomes saturated with water as it did in Hurricanes Matthew and Florence, Sigmon added, it caused the soil to shift or slide towards the river. 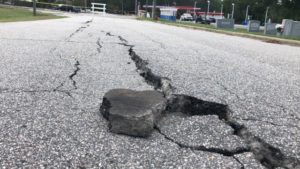 The damage to the cemetery was more significant with as much as a two foot drop in some locations in the cemetery, according to Sigmon.

The Town Council was offered three options by Sigmon. The first option is to repair the cemetery and return it to the condition it was in prior to Hurricane Florence; the second option is to restore the cemetery to pre-Hurricane Florence conditions and implement measures to reduce the frequency and severity of the soil movement. This option includes installing a retaining wall along the river and installing an underground drainage system along Queen Street; and the third option is to develop a new cemetery and move the existing graves then repair the existing cemetery.

Mayor Sylvia Campbell asked Town Manager Eddie Madden to explain the issue of moving the cemetery. Madden said there is a 60 acre parcel of land located across the NC 87 Bypass near the Elizabethtown airport the town owns, which is restricted for use for airport purposes only. Madden explained that only a small portion of the land is actually needed for the airport buffer zone. The town has received preliminary approval from the NC Department of Aviation to use the property for a cemetery if it is needed.

Madden explained that there is a possibility the town could receive some funds from the Federal Emergency Management Agency (FEMA) to help pay for the project. Madden added FEMA will only pay for one project and the town has left a placeholder in their FEMA application for damages to the cemetery.

Debbie Hester, who is a resident of Elizabethtown, suggested a solution would be to move the graves to the proposed site and lay out the cemetery in a pattern similar to the way the graves are located at the current cemetery.

“I am not opposed to a new cemetery for a permanent solution. That seems to me, from what I have heard, that is a guarantee,” said Hester.

Hester added that no one really knows for certain what will happen at the current cemetery when the graves are disinterred to be moved.

Ellen Bryan, who is also a resident of Elizabethtown, asked what will happen if someone who owns a grave site needs to bury a loved one at the cemetery before repairs are made. Madden said it would most likely depend on which section of the cemetery the grave site is located.

Another resident asked if it is safe to visit graves of those who are buried there. The answer is yes.

Another resident suggested the town relocate the cemetery then build a retaining wall to secure the soil from sliding further down the hill.

Mayor Campbell asked those in attendance if they were opposed to moving the cemetery. Only one audience member raised their hand.

The board did not take a vote on the matter. Mayor Campbell said the board will hold more meetings in the future to keep residents informed about the cemetery.

View the video of the meeting: