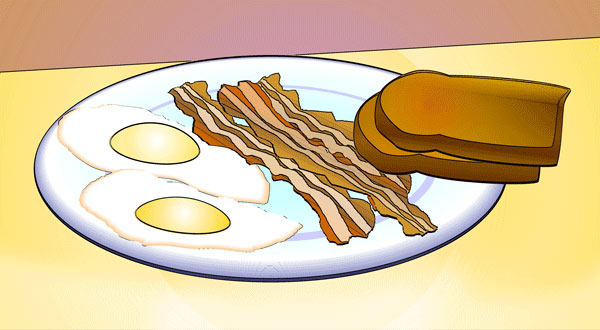 By the time you get to your desk in the morning, chances are you’re already frazzled. You open up your email and are bombarded with the need to pack your short-term memory full of the most important things to get done, asap. More than one study done on adults (and young people) found those who had nothing for breakfast underperformed on short-term memory tests compared to those who’d had their first meal. Think coffee will give you the buzz you need? One study used a group who’d only had coffee. Their memory test results were poor too. You need food!
2. Your Energy
The longer you go without eating, the more your body starts to slow and shut down. It doesn’t take rocket science to glean that food is your body’s main energy source, just like gas is for your car. Without it, thoughts, speech and reaction time sputter and come to a standstill. Do you really want to find yourself in that position when the boss wants you to conduct a meeting in the afternoon with an hour of prep time? Or during a promotion interview? Nah, probably not.
3. Your Concentration
Your brain does an interesting thing when it hasn’t had food for many hours (say the time between you go to bed and decide to grab lunch), it starts focusing on storing the energy it has left — as if you’re in a famine. This is when you start to lose your ability to concentrate. Not to mention headaches and hunger pangs start to take your focus away from what’s really important. Don’t let it happen to you.
4. Your Impulse Control
Back to the studies: They show that when you don’t eat breakfast, you tend to look for high calorie, complex-carb snacks against your will. Researchers think your body craves the sugar and carbs because they’re a fast source of energy — they take less time to break down. If you don’t eat breakfast, you’re likely to go for the Snickers in the vending machine, even though you have that package of string cheese in the office fridge.
5. Your Heart
Researchers have also proven that adults who have a years-long habit of skipping breakfast tend to have higher cholesterol, higher LDL and higher insulin levels. These are all precursors to heart disease and diabetes.
Breakfast Dos and Don’ts: Here’s the rub. It’s not just about eating something, anything, shortly after you wake up. It’s about eating the right things. Love your cinnamon toast crunch? Your body and brain doesn’t. It’s better than nothing, but it’ll hold you over for minutes instead of hours and will have you reaching for a mid-morning doughnut faster than you can come up with an excuse for being late. Stock up on the following for breaking your fast instead: real fruit (not just fruit juice), oatmeal, nuts, cheese, low fat yogurt, low fat cottage cheese, eggs, egg whites and whole wheat breads. You can pair any of these things together for a breakfast that works and prevents all of the previously outlined issues. Make a breakfast burrito with eggs and a wheat tortilla. Hard boiled eggs and an apple are also a good combo. Low fat cottage cheese with fruit on top is delicious. But resist the urge to buy cottage cheese packaged with syrupy fruit toppings; they’re loaded with extra sugar.
http://www.thefashionspot.com/life/178561-5-reasons-why-breakfast-is-still-the-most-important-meal-of-the-day/