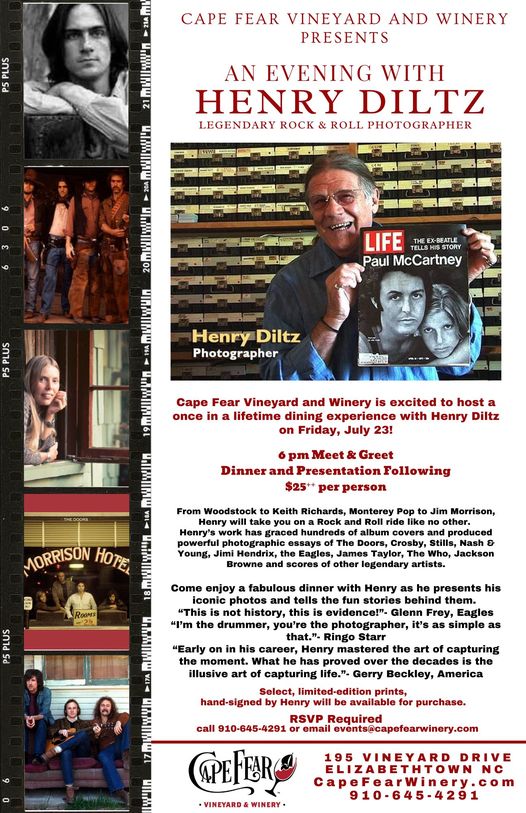 Alex Munroe, the owner of Cape Fear Vineyard and Winery, excitedly shared with BladenOnline that a legendary Rock N Roll photographer, and the official photographer of Woodstock, Henry Diltz, is coming to Bladen County for a visit.

Munroe stated, “He’s a big deal… He is the most famous Rock N Roll photographer in the world.”

Since he first picked up a camera about 50 years ago, Diltz has photographed many famous faces, including The Eagles, Paul and Linda McCartney, Young Michael Jackson, James Taylor, The Mommas and Poppas, Joni Mitchell, Jim Morrison, and so many more. The credit is his for more than 200 album covers. Who knows how many candid shots, magazine covers, and memories his lens has captured over the past half-century!

BladenOnline had the privilege to speak with Henry Diltz on the phone this week. He reminisced, shared stories, and expressed his excitement to visit North Carolina for the first time since the early 1960s when his folk group played here.

Diltz stated, “People ask me what I’m up to, and I tell them ‘I’m visiting Cape Fear’ and they always say ‘Wow!’”

As a man who has spent a lot of time with many “greats” over the years, he has many fond memories. His upcoming event at Cape Fear Vineyard and Winery will be an opportunity to hear about some of his great adventures first-hand. “Every picture is an adventure,” Diltz said. He added, “Visiting Cape Fear is another adventure. The adventure is the unknown, not what we have planned. The thrill of life is the people, and I am excited for all of the people I will meet.”

This event is an opportunity you don’t want to miss, especially if you are a fan of photography or Rock N Roll. Visit Cape Fear Vineyard and Winery on July 23rd at 6 pm for the meet and greet, dinner, and a presentation from Henry Diltz to follow. The cost is $25 per person.

In the words of Henry Diltz, “I am really interested in this situation we find ourselves in as humans on Earth. The act of life is amazing and exciting.”