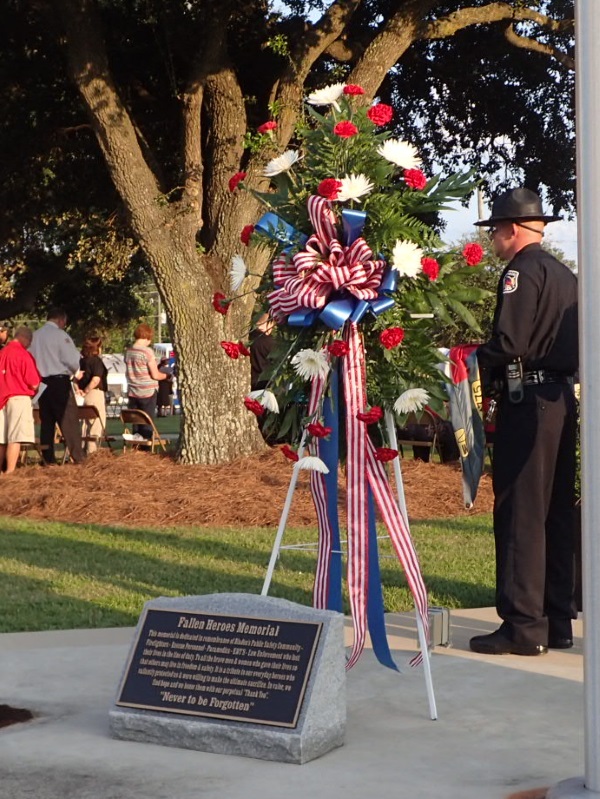 They stand frozen in time, two men far younger than I am now, Gary Cooper-esque smiles under dark eyes.

The taller of the two is my grandfather, W. Thomas Weaver. My dad was 2, leaning to 3, when Grandfather sent the photo home from France in 1918.

The men wear their Sam Browne belts over heavy coats, puttees laced to their knees, battered wide-brimmed hats at rakish angles. They stand in front of a large, bullet-pocked stone wall.

The fading handwriting on the back is not the precise Spencerian script of my grandmother, but the scrawl that my grandfather passed down through his son to the grandson he would never meet.

“Tom Weaver, after the fight. With Frank, who saved your daddy’s life. Later killed by Germans.”

Just as I always think of my grandfather on Veteran’s Day, I think of Frank on Memorial Day.

I do not know Frank’s last name, where he was from or anything else. All I know is he saved my grandfather, who apparently had a propensity for getting into dangerous situations.

Tom Weaver survived gas, bullets, shrapnel, fire, cold, and being stabbed, only to be killed by a trolleycar back home in Washington City. I like to think he would have appreciated the irony.

Frank, however, died in combat in what was dubbed “the War To End All Wars”.

Memorial Day is when we remember those who have given their lives in the service of this country; all too often we forget that fact, even now when we still have young men (and now women) dying on foreign fields.

Men like Frank, or men like my Uncle Jim’s fellow gunner Pete. Pete took a direct hit from a German 20 mm cannon in a plane that was trying to shoot down their B-25 as the German spiraled into the desert of North Africa to his own fate.

I’ve told you before of a fellow named Kyle Stout, who served beside my “Nevoo” John Thomas and his friend Anthony Verra in Afghanistan. John came home with injuries that will plague him all his life. Anthony lost his legs. Kyle was killed, as was a lieutenant, a fellow named Todd Weaver, who became somewhat famous for a letter to his young wife. He was
no relation, but I‘d be proud to call him kin.

Another soldier I never met, Sgt. T.J. Butler, helped me make some of the strongest friends of my life, when we stood together at his funeral, ready to protect his family from evil, sick people, just as T.J. once stood to protect his country. Thankfully, we didn’t have to follow through with our plans that day, but that’s a column for another day.

Like my grandfather and his friend Frank, all of the young men I mention above volunteered.

John even fought to get back in the service, as he had been discharged from the Navy after an injury. Tom came home to his wife and family, at least for a little while. Uncle Jim made it home too, and went on to have a family and a successful career. Anthony came home to one of the bravest women I’ve ever had the pleasure to become acquainted with, his wife
Shauna, and they have two beautiful children. John came home to start a new life as a civilian.

Frank, Pete, Todd, Kyle and T.J. went to different homes—eternal ones.
I had the honor the other year of leading an effort to commemorate the 50th anniversary of the start of the Vietnam War.

I am still haunted by something I heard from several of those veterans. So many would make mention of someone with whom they ate, slept, fought, prayed, laughed and sometimes caroused—only to end the story with the words, “He got killed when we…”

We heard plenty of war stories growing up, although the World War II and Korea veterans were dealing with young boys eager for adventure and patriotism, so the stories were somewhat sanitized.

I had to grow up to be able to see the hurt in the eyes of those who answered their country’s call, only to see some of their friends pay the final price.

I have never served in the military; none of the services wanted me, since my hearing wasn’t up to snuff. I have had friends my own age and younger die, including a couple of police officers and firefighters who were killed in the line of duty. But that’s different.

These men were my friends, yes, but we never could have the connection of those who left home to go to a foreign land because their country, the country they loved, offered them a substandard salary, middlin’ benefits and the chance to get hurt or killed protecting a sometimes ungrateful nation. That call is different, and the sacrifice is different as well.

I hope as you enjoy Memorial Day, you at least took a moment to think of the men like Frank.

I hope you do as I have in years past, and pray for those left behind when men stormed ashore at Normandy or some Pacific atoll, knowing their bodies were paving the way for their buddies who followed.

Men like the unknown sailor buried on the Burgaw courthouse square.
Men who heard the distinctive ping of a final clip ejecting out of an M-1 Garand rifle in the night, then fixed a bayonet one last time on a Korean hilltop.

Men who laid down fire covering a landing zone for a thumping Huey helicopter, knowing full well there might not be time or room for one more passenger.

Men and women who wiped sand, grime and blood from their faces and tried to tell friend from foe in places many couldn’t have found on a map before Sept. 11, 2001.

Memorial Day is not, as I noted to someone last week, about barbecues and beaches and fishing and fun and families; it’s about those who gave their all so we could enjoy those things.

On second thought, maybe we should enjoy Memorial Day; after all, those folks whose lives did not last to the end of their tours of duty did not serve for themselves. They served so that their families, friends and people they didn’t even know, for generations to come, could enjoy
all their country had to offer, in freedom without fear.

I doubt many died with smiles on their faces knowing they had become martyrs on freedom’s altar, as another writer put it on a bloodstained notebook, but I pray that we as Americans never take for granted the men who made us great—men like Frank.