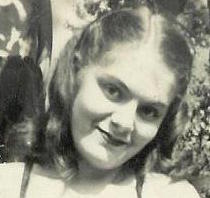 Above all else, she was a mother

It surprises, even shocks, some people when they realize the woman in the black and white swimsuit pictures is my mother.

Neither photo is objectionable, especially not by modern standards. In one, Miss Lois is maybe 18, with a demure, embarrassed look on her face. In the second, she is a little bit older, and not really happy at having her picture taken. That was part of Mother’s personality. She hated
having her picture taken, even though she was a beautiful woman long after those dark curls had become solid white.

Lest you think I am some Oedipal oddball, I keep those swimsuit pictures to remind me that like all mothers, Miss Lois was many things, including a pretty young girl who may or may not have kept an antique hatpin handy to fend off unwanted advances when she worked at the doughnut shop around the corner from the U.S. Capitol.

All too often, we see mothers not as ladies or even women, but as the ones responsible for running the house, keeping everyone clean and fed and healthy and reassured and disciplined. But there is always much more, so much more.

My mother was an artist; she never sang at Carnegie Hall (although one of her granddaughters likely will). Her drawings will never hang at the Louvre. Her writing was never published outside of newspapers, some small magazines and literary journals.

Yet she loved art.

She looked at a gourd and thought it resembled a snake, so she carefully painted a friendly snake-face on it and named it Hissy. She embroidered my first (and only) fancy cowboy shirt,
that she sewed.

She fought tooth and nail to save what has become one of the premier arts centers in Southeastern North Carolina, the Dr. Victor R. Small House. It got to the point county officials and a few state politicians hated to see her coming, because they knew what she wanted. When the N.C. Symphony was no longer going to come to our hometown, she led the effort to make sure that every child and every adult still had the opportunity to find out that classical music didn’t have to be boring. Her love of community theatre lives on through a scholarship named for her.

Miss Lois felt like there was some creativity in every person. It just needed the right outlet, and she wanted to be sure those outlets were available.

My mother grew things. Whereas I despair at convincing a pumpkin, squash or tomato to make it to maturity, she could take dead hanging baskets and bring the plants inside back to life. My brother Michael inherited that gene. She loved her flowers, and at the right time of the year, her yard was a veritable riot of all things green.

My mother loved to cook; she grew up in a farm family, and her first marriage was into another farm family. When I was young, it was rare that we didn’t have a tableful at Sunday dinner. Her holiday dinners were masterpieces. Even when there were just a few of us, Miss Lois still made
sure we had the opportunity to have a hot breakfast to start the day.

But unlike some women who tire of the never-ending cycle of cook-feed-clean-repeat, Miss Lois loved her kitchen her entire life.

As I have previously related, I owe my existence to a cake she made for my father, before they were even dating. She could make the simple, filling, everyday dishes as well as a lot of the fancier ones. After visiting my oldest brother and his wife in Italy, she tried her hand at dishes
she couldn’t even pronounce, and I think had she had enough time, she would have eventually made them as good or better than my Italian sister-in-law. Mother’s cookbooks – and there are hundreds – have nearly indecipherable notations and modifications and additions and
substitutions. My sister Becky and my wife divided some of them, and both are forever finding clippings, pictures, cards and notes between the pages. At the risk of bordering on blasphemy, those books were kind of a Bible for my mother, and the kitchen was her church. Feeding people was just another way of worshipping God for her.

Miss Lois was a passionate, loving wife to my father.

I will never forget how I panicked one night – right after Valentine’s Day – when I went by the home office we all shared to file a story. My father had recently been in the hospital, and we may have had one cellphone between all of us. Miss Rhonda was at work, but there was no one
home.

I immediately thought the worst.

I got my story filed, and was sitting there somewhere between terrified and seething when they came through the door around 8:30. Having missed their Valentine’s Day date, they’d made up for it by going to a restaurant I never thought to check.

I felt silly, of course, and Mother admitted they could have left me a note, but she also pointed out they were grown, and she reminded me that I didn’t always leave them a note when I was younger and disappeared.

Miss Lois wasn’t easily frightened or dismayed. When she and Papa wanted to go to Washington City to visit another sister and her family, Miss Lois drove until the highways turned into the Beltway and Sister Sharron took over out of self-preservation.

Miss Lois could do just about anything she set her mind to. She taught me how to raid setting hens, and she knew how to herd cattle. She could fashion a halter for a goat out of a piece of rope. She could bottle-raise a baby animal or bird. She stood beside her brothers and father
when a wildfire threatened their farm in the late 1930s. She could consistently outfish most men. When our Scout troop had a mother-son camping trip, Miss Lois led the ladies, and they beat us boys hands down in almost every competition.

She was all these things, but above all, she was my mother.

On the day she left us, Miss Lois fought.

She fought as she fought the wildfire that threatened her family’s farm. She fought as she had fought for the arts center. She fought like she had fought her brothers. That was after a couple weeks of the peace that comes to some dementia patients. While we were slowly being torn to
bits watching her slip away, Miss Lois was in a happy place, holding babies, fishing, sewing, cooking, and for all I know, dancing with my father.

She left us on Valentine’s Day, one when the weather was similar to that outside my windows right now. It was cold, dreary, and threatening snow. I was not the only one who figured she and the Old Man had a date set for that night, and by cracky, she was going to get there. There was one lonely, cold looking bird clinging to the limb of the winter-slumbering tree
beside her hospital room window.

Lois Clara Belle Covert Weaver was born in October 1929, and died Feb. 14, 2004. She left behind a passel of grandchildren and great-grandchildren, two daughters and three sons, of whom I was the youngest. She was a patroness of all the arts; a writer and reporter; a singer; a seamstress; a gardener of flowers; a wife, a friend and a mother. She never stopped being any of those things, even when she took on the job she loved the most, that of being a mother.

I keep the swimsuit photos of Miss Lois to remind me what she set aside because she had a higher calling, one for which she gave her all.

Because above all else, Miss Lois was a mother.

She was my mother.

And I miss her every single day.