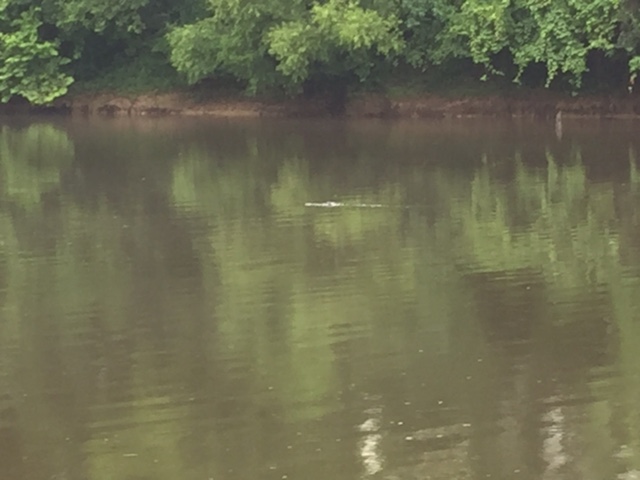 Alligators are known to ply the waters of the Cape Fear River though not in large numbers. One Bladen County family got a little closer to an alligator this weekend they would like.

Chris Campbell and his son, Zach, were enjoying a day at the family property on the Cape Fear River just south of Elizabethtown when they noticed an alligator swimming just off of the family pier, according to Sylvia Campbell.

She said that they estimated the alligator’s size to be about 12 feet.

NC Wildlife Officer Michael Nunnery said that alligators do reside along the Cape Fear River in Bladen County, but not in large numbers. He said they are mainly found in the beaver ponds along the river.

Nunnery said there are some things folks with interests along the river can do to lessen their chances of an alligator encounter. He said that folks should never feed an alligator.  He noted they can seem docile but they are still wild animals.

Nunnery said those folks that have fishing and hunting cabins along the river are advised not to throw their fish and and other food-related debris off the dock into the river. Nunnery said if you do this, it could well draw a hungry alligator looking for a snack. Instead, he recommends burying the fish somewhere on your land.