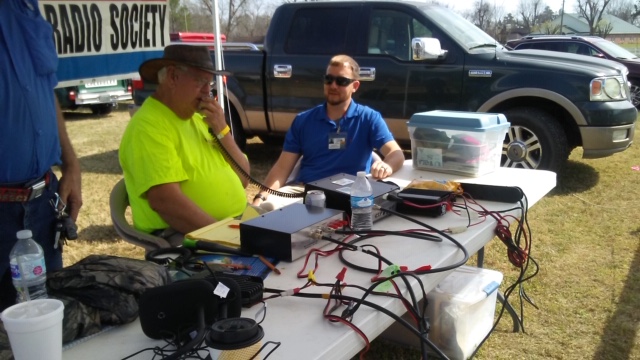 Despite the grinding roar of tractor-pulling contests going on behind them, and the thunderous concussion from a Confederate reenactors cannon exploding from across a road next to them, Bladen County’s amateur radio enthusiasts proved that they can operate and maintain worldwide communications, including emergency radio networks, even under the toughest of circumstances, and in any kind of weather.

Enthusiasts from the Bladen County Amateur Radio Society were on hand at Lake Waccamaw’s Southern Farm Days exposition last weekend to showcase their unique talents, while lending support to the Boy’s and Girl’s Homes of North Carolina. Southern Farm Days is an annual event at Lake Waccamaw that highlights North Carolina’s agricultural heritage, and is an event which allows patrons, exhibitors, and vendors to provide financial support for the programs of the Boy’s and Girl’s Homes.

Using their own equipment, which consisted of HF, UHF, and VHF radio transceivers, antennas, and power supplies, club members were on the air within two hours after arriving on site. Almost immediately after transmitting a “CQ CQ” call over the radio inviting others to respond, club president James T. Bryan of Dublin began receiving return radio calls from other amateur operators already on the air in Oklahoma, Colorado, and in the Dakotas. Fellow club member Bob Edwards soon took over, and began logging radio conversations, called ‘QSO’s’, from operators between Maine and Florida. Later that evening they logged radio contacts from South America, and even reached amateur radio operators ‘Down Under’ in Australia!

Curious visitors to Farm Days frequently stopped by to chat with club members, asking them to explain what their radios could do, and how far they could reach. Many were startled to find out that amateur radio operators could not only talk to one another across states or around the world, but could also talk to astronauts on the International Space Station, and even bounce radio signals off the moon, or from certain orbiting satellites—all from the comfort of their own homes! Bryan explained to Ian Callahan, the Boys and Girls Home’s Transitional Services Director, that “There aren’t any geographical limits to amateur radio. We can achieve radio contacts virtually anywhere in the world, from the Antarctic to the jungles of the Amazon, and from Mt. Kilimanjaro in Kenya to sailboats floating in the Pacific!”

Club member Renn Thomas explained further, adding that, “If need be, we can also coordinate emergency services for the county during natural disasters. And, if cell phones are down, amateur radio can operate around the clock–from a car, if we had to!” Fellow club member James ‘Mack’ McCallum agreed, and chimed in, noting that “Morse code is still in use, too, and very often—depending on weather and atmospheric conditions–is still one of the most effective ways to communicate, especially at night.”

Visitors to the amateur radio tent were fascinated by the potential for instant, world-wide communications at the touch of a microphone button, and club members encouraged them to try it, telling them that once they get on the air as a qualified operator, they can proudly say, “Now I’m talking!”