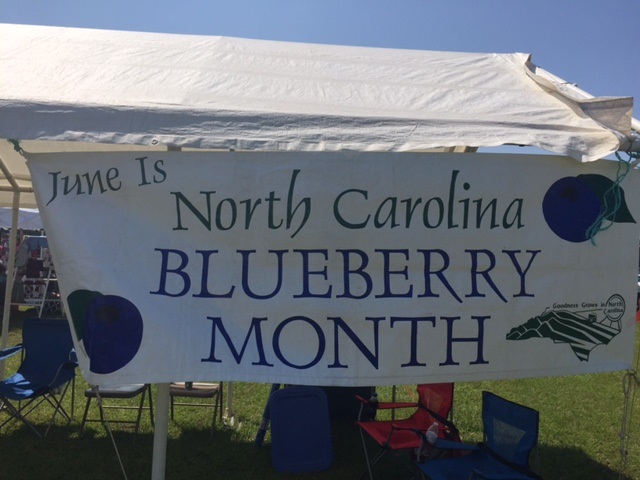 Spread the love
[slideshow_deploy id=’55913′]
By: Erin Smith
A hot, humid morning didn’t dampen the enthusiasm as the Ammon Blueberry Festival was kicked off with a pancake breakfast held at the Ammon Volunteer Fire Department.  The aroma of blueberry pancakes and sausage wafted through air as folks visited, renewed acquaintances and made new friends.
The pancake breakfast was followed by a parade that was held at 10 a.m. The parade was lead by the Bladen County Fire Fighters Association Honor Guard. The Dunn Clowns were a crowd favorite as they danced their way along the parade route. The Sudan TomCats of Robeson County also thrilled those in attendance with their driving skills.
Also, the parade was filled with elected officials, beauty queens and the Glitterettes baton twirlers showed off their skills.  Classic cars, trucks and antique tractors chugged their way down the parade route followed by several floats from area churches.
Flying above the parade was an ultralite powered parachute with the words Support Our Troops emblazoned on the chute.
At the festival ground the opening ceremonies including the signing of the national anthem and Amazing Grace was rendered in the bag pipes. Bladen County Commissioner Jimmie Smith recognized local dignitaries and elected officials. He also acted as auctioneer for the blueberry auction.
There was a special recognition for Virginia Thomas who was celebrating her 80th birthday by attending the festival. She was called to the stage and was serenaded with a rousing rendition of happy birthday.
Also, there were four trophies awarded to the fire departments that participated in the parade. Hickory Grove won the award for the oldest apparatus entered in the parade. Ammon Volunteer Fire Department won third place, Roseboro Fire Department received second place and Garland won first place, all based on the ages of their apparatus.
The Southeastern Cruisers Car Club of Bladenboro held a car and truck show during the festival. Staci Helms won the award for Best Ford with her entry of a 2003 Ford Mustang; Bob Hardman won Best GM for his entry of a 1983 El Camino.; Wayne Dove won the award for Best Truck for his entry of a 1956 Ford F 100 pickup truck. The trophy for Best of Show went to Jerome Marchmon for his entry of a 1970 F-100 pickup truck.
There was also live music on the stage the consisted of southern Gospel favorites. All proceeds from the event go to support the Ammon Volunteer Fire Department.
Tags: Ammon Blueberry Festival fun day for everyone