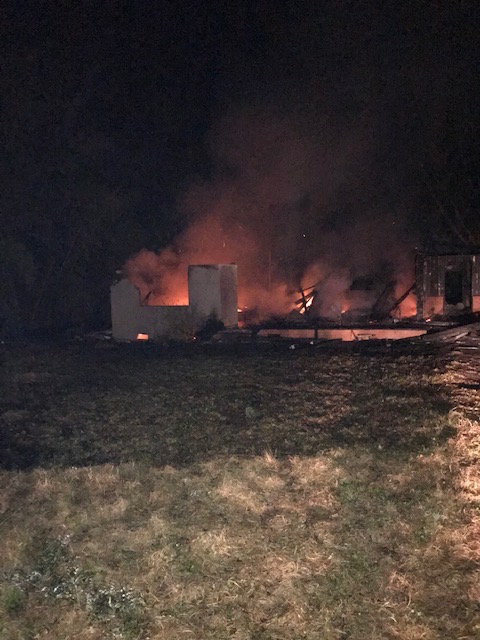 There have been many suspicious fires in the Dublin area since February. A structure fire near the intersection of Highway 41 and 131 occurring early Thanksgiving morning is thought to be part of a string of arson activities in the area according to officials.

The old feed and seed shop belonging to the Dowless family was a blaze when firefighters arrived on the scene. The shop was first opened in 1964 by Mr. Ross Dowless. The Dowless family had storage in the shop and plans to open the store as nursery again in the spring, according to Chief Batton.

“Now, the Dowless family will have to start all over if they want to open up a shop at that location,” Chief Batton said. The structure was completely consumed by the fire. This is the first property in the series of suspicious fires where the owners did have the structure insured, according to Chief Batton.

Chief Batton said he did believe the Thanksgiving Day fire was one of seven or eight fires the area has had believed to be arson related. “I turned the investigation over to the Bladen County Fire Marshal’s office so maybe they can find out what is causing all these fires,” Chief Batton said.

BladenOnline.com staff members called Kenneth Clark, BC Fire Marshall, but have been unable to reach him for comment.

The first suspicious fire occurred when an unoccupied home on NC 410 burned near West Bladen High School on Tuesday, February 5th, and a second suspicious fire claimed a mobile home on Friday morning, February 8th. Both homes were empty and had no insurance at the time of the fires.

Another fire took out a mobile home in March. More fires have continued to pop up in the same vicinity.

In a previous interview about the Dublin area fires Clark said, right now, the suspicious fires are occurring in a section of roadway along NC 41 West near Bladen Community College. He added investigators are working diligently to gather as much evidence as possible and they do have persons of interest.

The public is asked to be on the look out for any suspicious activity in the area of NC 41. If anyone has  information related to the suspicious fires in the Dublin area please contact the Bladen County Fire Marshal’s Office at 910-862-6755.