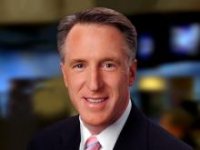 Mr. Mason will be presenting on campus Tuesday, October 15, 3019 at 11 A.M. in the Student Resource Center. The event is free and open to the public. This program is a part of the Writers Series at Bladen Community College and is made possible by a grant from the NC Humanities Council, a statewide nonprofit and affiliate of the National Endowment for the Humanities and Bladen Community College.

Scott Mason is a broadcast journalist with 30 years of television experience. He has won dozens of awards for documentaries, writing, and feature reporting, including three National Edward R. Murrow awards and 20 regional Emmys. In both 2004 and 2005, the Electronic News Association of the Carolinas named Scott the North Carolina Television Reporter of the Year.

Scott’s success caught the attention of WRAL-TV, the CBS affiliate in Raleigh, North Carolina. In April,1997, Scott became the station’s Documentary Producer. He researched, wrote, and produced nine documentaries before adding his talents to the nightly news team as a reporter specializing in features.

Today, Scott is known as the Tar Heel Traveler. His Monday-Thursday feature series on WRAL takes viewers along the back roads of North Carolina where he meets memorable characters, finds out-of-the-way places, and unearths fascinating historical footnotes. The series has
become so popular it has led to Tar Heel Traveler half-hour specials, which Scott produces each quarter.

Scott graduated in 1984 from Washington and Lee University in Lexington, Virginia, where he majored in Journalism and Communications. He is currently pursuing his master’s degree in
creative writing at Queens University of Charlotte.

For more information about this reading and other events in the Writers Series of guest speakers at BCC, contact Dr. Joyce Bahhouth at 910 879-5540.