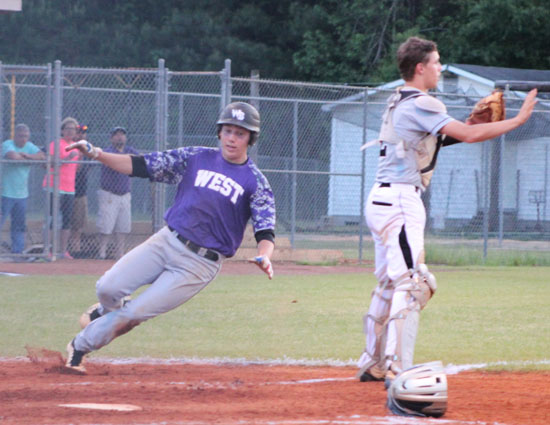 Troy Edge and Trent West had triples late in the game and Chandler Lennon pitched into the seventh inning as seven West Bladen seniors closed out their home careers Friday night with an 8-5 win against the Clinton Dark Horses in a Four County Conference game.

Edge’s two-run triple in the fifth snapped a 4-all tie. West crushed a run-producing triple and scored off an error in the sixth to give the Knights a pair of insurance runs.

Clinton ace Jonathan Wright was tagged with the loss. He gave up five earned runs on 11 hits, a walk and five strikeouts in going the distance.

The seven West Bladen seniors who won their final home game were Branden Carson, Seth Britt, Hunt, Lennon, McCullum, Jones and Edge. The players were escorted onto the field by the families and recognized in pregame ceremonies.

The victory gave the Knights a 6-6 record in the conference and 7-13 overall. West Bladen closes its regular season with games at Midway on Tuesday and at East Bladen on Thursday.

The Knights will need to win both games and get some help to ensure a state playoff berth, although a pair of wins would help their wild-card chances. East Bladen is 10-2 and has clinched the conference’s top Class 2-A seed with Clinton’s loss against West Bladen. Clinton and Midway are both 8-4. The top three teams qualify for the playoffs.

In Friday’s win against the Dark Horses, the West Bladen defense turned double plays to end the first and third innings. In the first, Pidgeon fielded a grounder to short, flipped to Jones at second, who threw to Williams at first base. In the third, Jones fielded a grounder, tagged the runner and threw to first.

Offensively, West Bladen scored three runs in the first and another in the second to open a 4-0 lead.

In the first, Hunt led off with a single and went to second when the ball was misplayed by the right fielder. Pidgeon laid down a sacrifice bunt that moved Hunt to third. Lennon grounded out to first as Hunt scored. West reached on an infield error and came around to score on Williams’ double in the right-center gap. Williams went to third when Brtt reached on an error. Williams then scored on a wild pitch.

In the second, Jones ripped a single up the middle to lead off. He moved to second on Edge’s single, went to third on Hunt’s fly out to right, and scored on Pidgeon’s single to center.

Clinton plated three runs in the fourth, getting a RBI-single from Wright and a pair of West Bladen errors to cut it to 4-3. The Dark Horses tied in the fifth when Charles Jordan led off with a walk and later scored on Wright’s sacrifice fly.

West Bladen quickly regained the lead in the bottom of the fifth. After the first two batters were retired, McCullum was hit by a pitch and Jones lined a single to center. Edge followed with his triple to deep right-center that scored McCullum and Jones that gave the Knights a 6-4 lead.

West Bladen added a pair of runs in the sixth. After an out, Lennon singled. West then crushed his triple to the fence in the left-center that scored courtesy runner Ashworth, with West scoring on the play when the throw to the third baseman was off the mark.

Clinton loaded the bases with one out in the seventh, but managed only one run on a groundout.