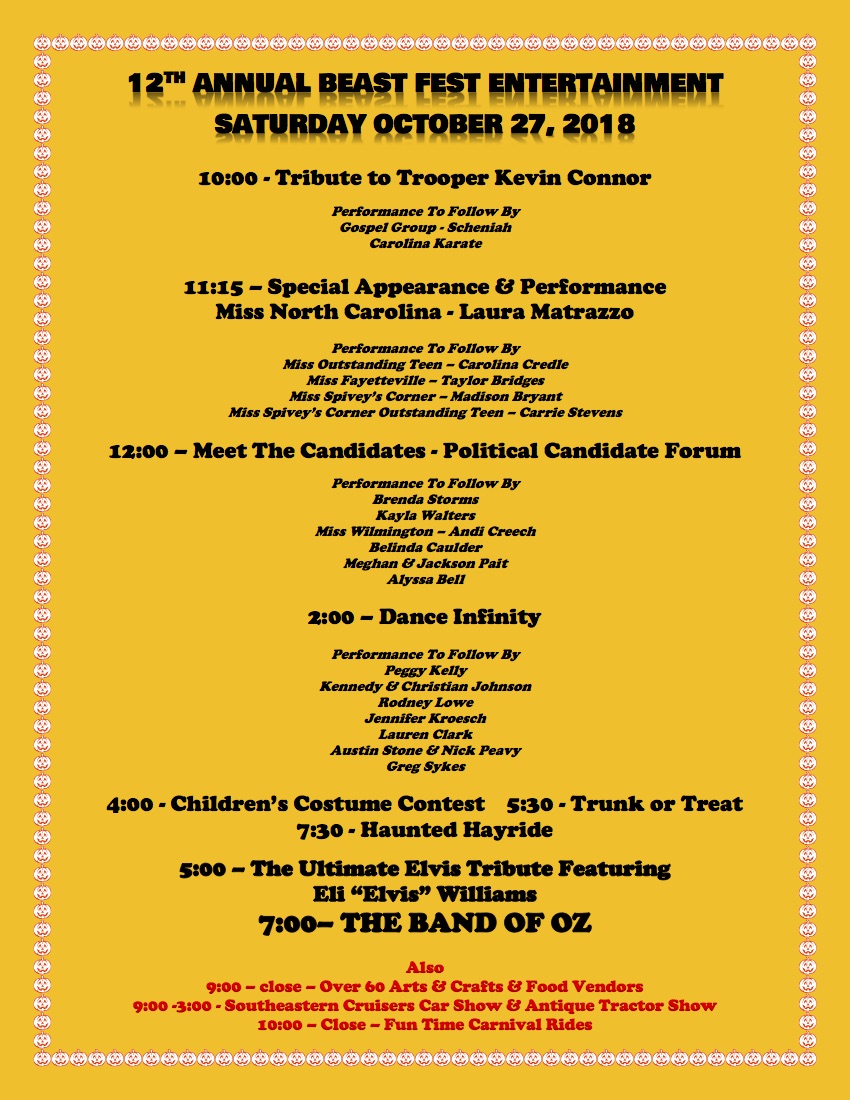 UPDATE: Excellent weather and plenty of excitement are expected to be the order of the day for the 12th annual Bladenboro BeastFest on Saturday, October 27. There will be pre-festival celebrations as well on Friday, October 26.

Boost the ‘Boro President, Don White, said, “We are expecting a big festival this year.” 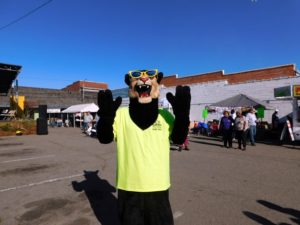 He anticipates there to be between 6,000 to 8,000 festival attendees throughout the event. The Beast of Bladenboro is expected to make an appearance during the festival.

White said there will be a special tribute to fallen NC Highway Patrol Trooper Kevin Conner. Bladenboro is the hometown of Trooper Conner and the tribute will take place at 10 a.m.

“Members of the North Carolina Highway Patrol will be in attendance and will be conducting that event,” said White.

He said the tribute will include a performance by the Highway Patrol’s Bag Piper Unit.

The Southeast Cruisers Car Club will have a car show from 8 a.m. until 3:30 p.m. on Railroad Street.

There will also be amusement rides Friday from 5 p.m. until 10 p.m. The performance by Gary Lowder and Smokin’ Hot that was scheduled to take place at 7 p.m. on Friday night has been canceled due to the weather, however, the rides are still on go according to Beast Fest Chairman, Charles Ray Peterson.  Amusement rides will also be operating on Saturday.

On Saturday live entertainment will be on the stage throughout the day. There will be performances by local residences and Miss North Carolina Laura Matrazzo will perform at 11 a.m.

White said one important highlight of this year’s festival will be the Candidates’ Forum which is scheduled to take place at 12 noon. All of the candidates have been invited to attend BeastFest and will be allowed time to briefly introduced themselves and speak about what is important to them.

At 2 p.m. Dance Infinity is scheduled to perform and a crowd favorite, the Children’s Halloween Costume Contest will take place at 4 p.m. Last year, there were 90 children entered in the costume contest, according to White.

White said a much anticipated performance this year will be the appearance of Elvis. Eli Williams, an Elvis impersonator from Pigeon Forge, Tennessee, will take to the stage at 5 p.m. to entertain festival attendees.

Trunk or Treat hosted by New Light Church will take place at 5 p.m. A Haunted Hayride is planned for 7:30 p.m.

The Band Oz will close out the festival when they take to the stage at 7 p.m. on Saturday.

There will also be plenty of food and the crowd favorite collard sandwich will be available. There are 60 vendors with everything from jewelry to arts and crafts.

“We invite everyone to come out and enjoy the day,” said White.

He said the festival this is very important as all proceeds generated from the festival will be utilized to help businesses that were damaged in Hurricane Florence.

He said 12 businesses in the downtown have been identified as having suffered flood damage and, of those 12 businesses, only four will not be ready to re-open in time for Saturday’s event. White also said some new businesses have expressed an interest in locating in Bladenboro.