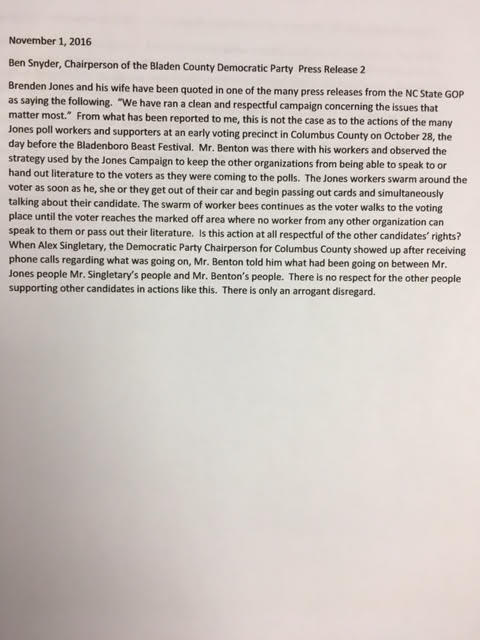 “Brenden Jones and his wife have been quoted in one of the many press releases from the NC State GOP as saying the following. “We have ran a clean and respectful campaign concerning the issues that matter most.” From what has been reported to me, this is not the case as to the actions of the many Jones poll workers and supporters at an early voting precinct in Columbus County on October 28, the day before the Bladenboro Beast Festival. Mr. Benton was there with his workers and observed the strategy used by the Jones Campaign to keep the other organizations from being able to speak to or hand out literature to the voters as they were coming to the polls. The Jones workers swarm around the voter as soon as he, she or they get out of their car and begin passing out cards and simultaneously talking about their candidate. The swarm of worker bees continues as the voter walks to the voting place until the voter reachers the marked off area where no worker from any organization can speak to them or pass out their literature. Is this action at the all respectful of the other candidates’ rights? When Alex Singletary, the Democratic Party Chairperson for Columbus County showed up after receiving phone calls regarding what was going on, Mr. Benton told him what had been going on between Mr. Jones people Mr. Singletary’s people and Mr. Benton’s people. There is no respect for the other people supporting other candidates in actions like this. There is only an arrogant disregard.”