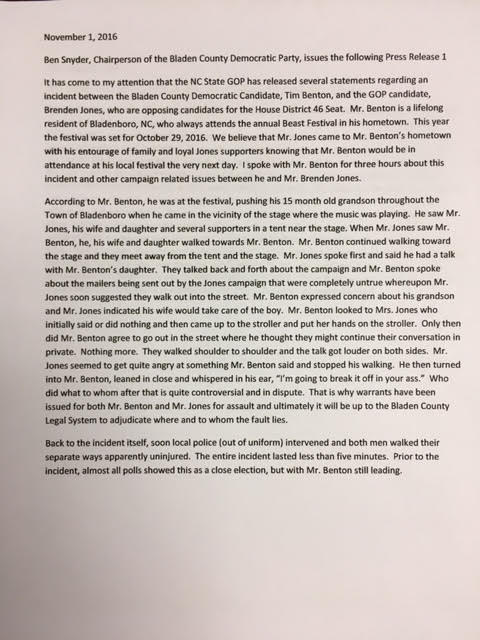 “Also attending the festival was Mr. Benton’s only daughter and the mother of his grandson. She picked up a piece of Mr. Jones’ campaign literature and saw a picture of her father’s face on one of the four birds. The other three birds in the picture were President Obama, Hillary Clinton and Roy Cooper. She decided to talk with Mr. Jones and took the picture with her. She asked if she could speak with him and he agreed. She asked if he had authorized it and he said no. When she pointed to the statement on the picture that said “authorized” by this campaign, he basically said he had signed a blanket authorization for anything the people who produced these campaign items wanted to do they could do under his authorization. She begged him to please stop these type of tactics that upsets her father. His answer to her best memory was, “I will tell you this. If his side throws a grenade, I will use the bomb.” A little later on in the conversation he told her to her best memory “If they (his media commercials) air it will be so bad that your family will want to move to Oklahoma or somewhere.”