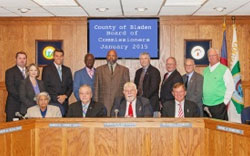 By bladenonline on 03/31/2015
Bladen County Commissioners continue to prepare themselves for the upcoming task of serving as a Board of Equalization and Review as the most recent revaluation process nears the end.
Monday, all nine commissioners participated in a statewide webinar hosted by the UNC School of Government.  a School of Government staff person hosted the meeting, and was assisted by representatives from the Department of Revenue and three experienced county tax officials from across the state.
Commissioners were told that $8.1 billion is collected annually in property tax dollars across the state.  That represents about 50% of local government budgets statewide, by far the largest source of local revenues.  Property taxes are important because of the amount, but also because the funds are unrestricted.  Sales tax is the second most important source of revenue, however, that source has leveled off, in fact has dropped over the past few years.
The statewide average tax rate is about 62 cents per $100 value.  The state has a $1.50 limit on property taxes and no county in the state is near that, in fact the highest rate in North Carolina is near or just above $1.  The limit is for any one unit of government, not the combined rate of a county and municipality.
Commissioners were told the purpose of revaluation was to determine the true value of the property, described as an arms length transaction between a willing seller and a willing buyer.
The tax officials stressed the January 1 is an important date in dealing with property taxes.  It is the date that many decisions are based on.  For instance, the value of property on that date is the value that the tax rate will be applied to.  the January 1 owner, person or business, is responsible for paying the tax bill sent in July or August.
Examples were noted, for instance, if a property owner on January 1 were to suffer a total loss, (example, house destroyed by fire) after that date, by state law, they are still responsible for paying 100% of the tax bill.  It is all about who owns the property on January 1 of each year.  The Board of Equalization has no option, the taxpayer owes the bill.
The webinar participants said most counties held revaluation every 8 years.  That is the law, however, a county may shorten the process.  Some now revalue every 4 years.
Bladen Commissioners learned that once the real property values were set, they could not be changed over the next eight (8) years due to economic changes/market conditions.
Personal property is revalued every year.
The presenters reminded commissioners they could serve as the Board of Equalization and Review or appoint citizens to serve in the capacity.   Many more urban counties use the later while in about half the counties in the state, the Board of Commissioners act as the Board of E&R.
If a separate board is appointed, commissioners are delegating the new board some of their authority to perform some of their duties.
Much emphasis was placed on how to conduct meetings including the size of the room.  The E&R meetings are a quasi-judicial process that is subject to the open meetings law.  Hearings and decisions must be made in public and include the property owner or his spokesperson.  Tax payers and the public must be allowed to hear the debate.  There can be exceptions if some part of the hearing involves confidential information.
The Bladen County Commissioners will begin the Board of Equalization hearings on Monday, April 27 at 10 a.m.  Property owners must make an appointment with the tax office in order to appeal their values.
Share: