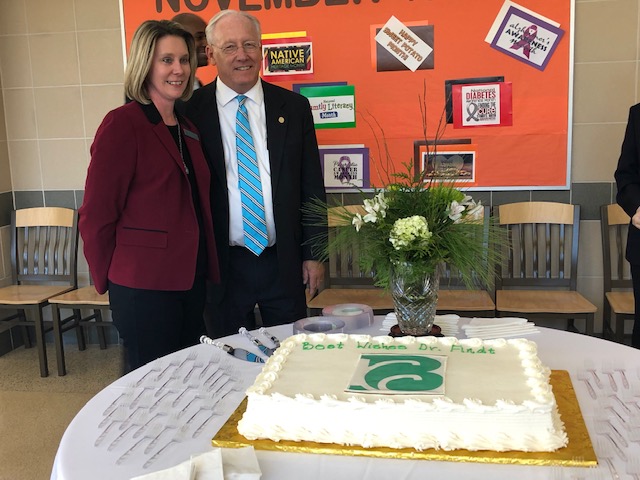 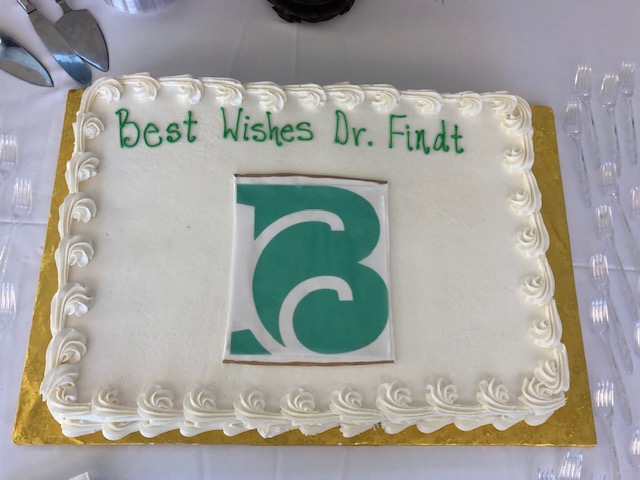 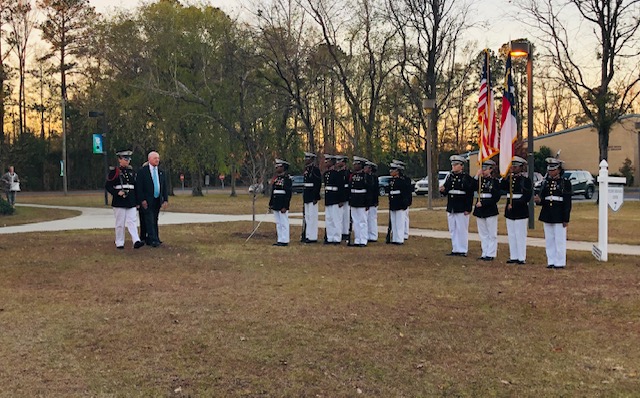 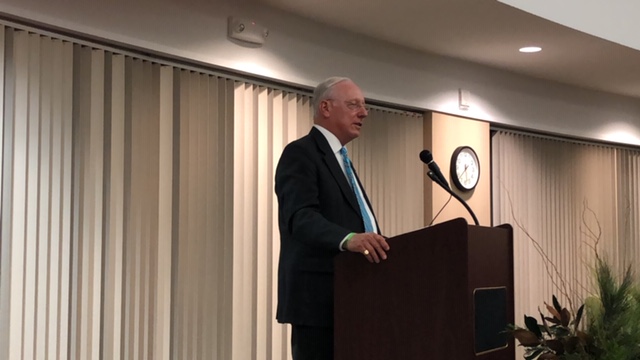 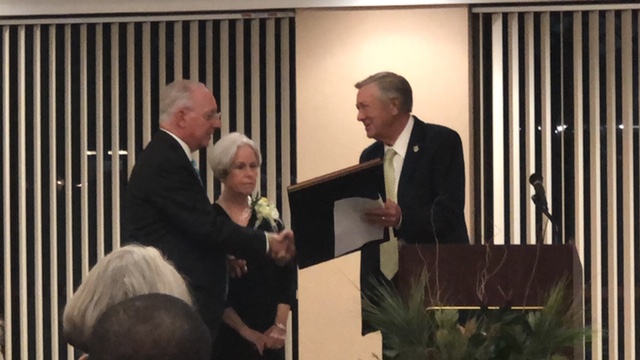 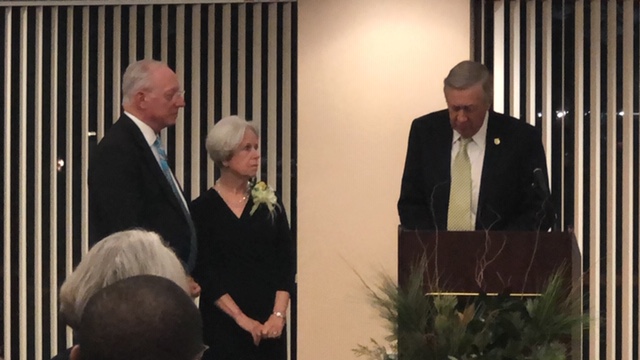 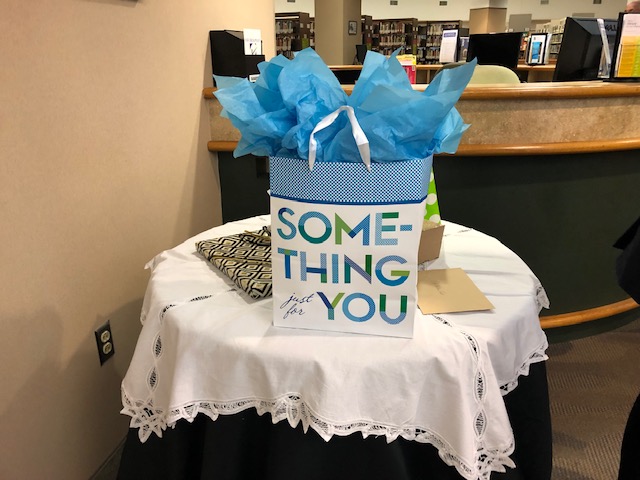 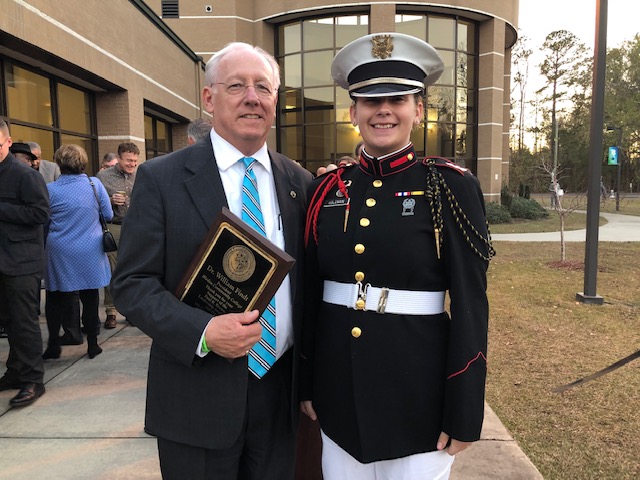 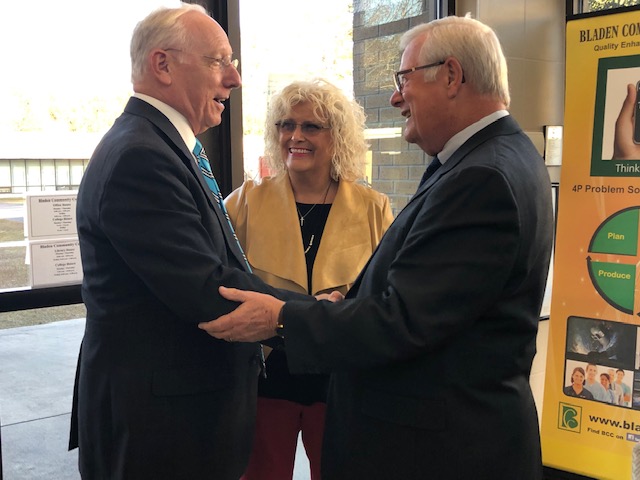 The gathering was filled with laughter and reminiscing as BCC President Dr. William Findt greeted each guest and warmly welcomed them to the reception. Dr. Findt called the occasion “bittersweet.”

Following the presentation by the Paul R. Brown Leadership Academy, guests gathered in the college’s library where Dr. Findt was presented the Order of the Long Leaf Pine by NC Representative William Brisson.

Many of those gathered referred to Dr. Findt as someone who is well respected in the community and someone who was willing to make hard decisions for the betterment of the students and the school. Dr. Findt is also thought of as an agent of change for the school.

He added Dr. Findt’s leadership has helped to steer the college in a new direction and the college is considered one of the best community colleges in North Carolina.

“He came in at a time when we needed a leader to take us to another level,” said Troy.

Also speaking during the reception was Barbara Knight of the Bladen Community College Foundation Board. She spoke of Dr. Findt’s strong vision and leadership for the college.

“I thank you for the influence and your support to the foundation,” said Knight.

She noted the number fo scholarships to students has grown under Dr. Findt’s tenure and the foundation is on track to raise about $1 million by the end of 2018.

“His tenure here has caused the college to flourish and to grow,” said Hester.

Sharon Coe, Business/Office Administration Instructor, said Dr. Findt pushed the faculty and staff out of their comfort level in an effort to grow and improve the school.

“When we stand on the shoulders of those who came before, we stand taller. You have helped us to stand taller,” said Coe.

Dr. Robert Taylor, Bladen Counthy School’s Superintendent, spoke of the friendship and support Dr. Findt has offered him over the years.

“I want you to understand that commitment goes beyond the community college. As a K-12 educator, I can’t say enough about Bladen Community College,” said Dr. Taylor.

He remarked Dr. Findt was instrumental in assisting the school system with the opening of Bladen Early College. Dr. Taylor said Dr. Findt has supported the effort. Many of the faculty at the early college are also faculty of Bladen Community College.

Bladen County Commissioners Chairman and BCC Board of Trustees member Ray Britt said Dr. Findt has been a strong leader at the school.

“The staff is unbelievable. I have learned a tremendous amount in a short period of time,” said Britt.

Several of Dr. Findt’s colleagues also attended the event. They spoke highly of Dr. Findt and his accomplishments at Bladen Community College.

Kennon Briggs, Chairman of the Board of Trustees of UNC-Asheville, retired Executive Vice-President and Chief of Staff of the North Carolina Community College System also shared remarks about Dr. Findt.

“When I became System’s Chief Financial Officer, Dr. Findt had just become President (of Bladen Community College). There were some challenges at the time at the college. Dr. Findt over the past decade has moved the college miles forward.”

Dr. Keen said, “As a colleague of Dr. Findt’s for a long time, I think he did a great job. He has lead with great vision.”

Following the festivities, Dr. Findt said, “This is a bittersweet moment for me to realize, I won’t be coming here everyday after December. It’s been a wonderful ten years and I have certainly enjoyed it.”