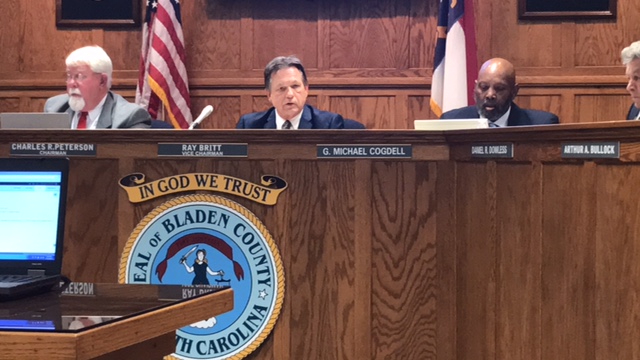 The Bladen County Board of Commissioners has a meeting scheduled for Monday, February 3rd and it is rumored to be well attended by area residents. This afternoon County Manager, Greg Martin, released an updated agenda.

Although attendance is expected to be higher than normal the meeting is still scheduled to be held in the lower level of the Bladen County Courthouse. The courthouse is located at 106 East Broad Street starting at 6:30 p.m..

The Bladen County Chairman of the Board of Commissioners, Ray Britt did make a statement on the Second Amendment request.

“I respect the Second Amendment of the Constitution of the United States and support what our fore fathers wrote in the second amendment and the rights to bear arms,” Britt said.

“However,” Britt continued, “I also, feel a responsibility to help protect the citizens in Bladen County by keeping the laws in place to protect citizens to prevent someone from carrying firearms in the courthouse.”

A copy of the revised of the  Resolution Declaring Bladen County North Carolina A Constitutional Rights Protected County was given to BladenOnline.com by Mr. Priest this week. Priest will present the resolution to the County Commissioners during the appointed time according to the agenda.

View the full agenda of Monday’s Board of Commissioners meeting, click here.

Tags: Bladen County Board of Commissioners Chairman Ray Britt Releases Statement on Second Amendment Resolution and Complaints About the Elections Board