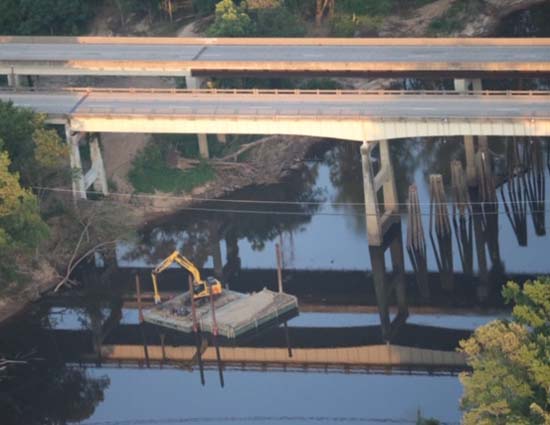 The N.C. Department of Transportation awarded a $23.3 million contract to Smith-Rowe LLC of Mount Airy, which will replace the northbound and southbound bridges with a single, four-lane structure over the Cape Fear River. The new bridge will include 8-foot shoulders on each side to accommodate bicyclists and pedestrians. The work will start this fall.

Smith-Rowe was a lowest responsive bidder after bids were opened last week.

In an earlier, separate contract, Smith-Rowe began in August demolishing the northbound bridge, which was closed last year due to damage sustained by hurricane floodwaters. Drivers are now using the southbound bridge in a two-way traffic pattern.

Smith-Rowe will be required to maintain two-way traffic while building the new bridge in a technique known as phased construction. When half of the new structure is constructed, traffic will be shifted on it from the southbound bridge, so that it also can be demolished. This process will allow the new bridge to be completed.

The contract’s completion date is May 2024, when all lanes are scheduled to be opened to traffic.

“It’s a complex project to maintain traffic while we build what will be a very large bridge, so people will see construction activity for the next three and a half years,” said Ken Clark, the department’s Division 6 district engineer based in Whiteville.

Replacing both bridges with a single structure will reduce maintenance costs and lower the risk of damage by future flooding. Because of the emergency need to replace the bridges after suffering flood damage, the Federal Highway Administration will pay 80% of the construction cost, with the NCDOT’s highway trust fund covering the rest.