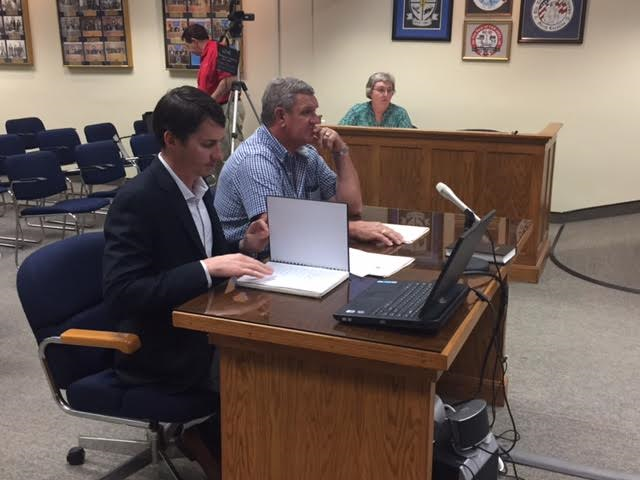 The Bladen County Board of Commissioners met in a special called meeting on Thursday afternoon and approved the Phase IV Water Project to move forward. Commissioners Russell Priest and Ashely S. Trivette were excused from the meeting and Commissioners Daniel Dowless and David Gooden were also unable to attend.

The Phase IV Water Project is projected to cost $6.5 million. The funds are proposed to come from a $1 million grant from USDA, a loan of $5 million from USDA and a $500,000 in a local match. The county’s water customers could see a $2.40 increase in their bill each month bringing the base rate to $19 or $21 per month and a connection fee of $150.

Adam Kiker addressed the board and said the USDA has contacted his staff and stated they are willing to commit to a grant. He said on May 5 of every year, USDA performs what is called a pooling of every state’s funds that are not committed to a project. He said once the money is pooled, it is then reissued to other states.

“This year, the state thinks the money pooled will go to other programs within USDA,” said Kiker.  He told the board the USDA staff in North Carolina are uncertain if they will have the means to fund the project after May 5.

Commissioner Michael Cogdell asked if the county has enough wells and are the wells adequate for the system. Kiker said based on normal system growth, yes. Commissioner Cogdell asked if a large industry was to move to the area would the system be able to accommodate them. Kiker replied if it is a major industry which would require heavy water use such as a bottling plant the answer is no; however, he said if it was an industry such as a technology industry that does not require heavy water use, then yes, the system can handle the demand.

Commissioner Ray Britt made a motion to approve the project and Commissioner Arthur Bullock seconded the motion.  The project was approved.