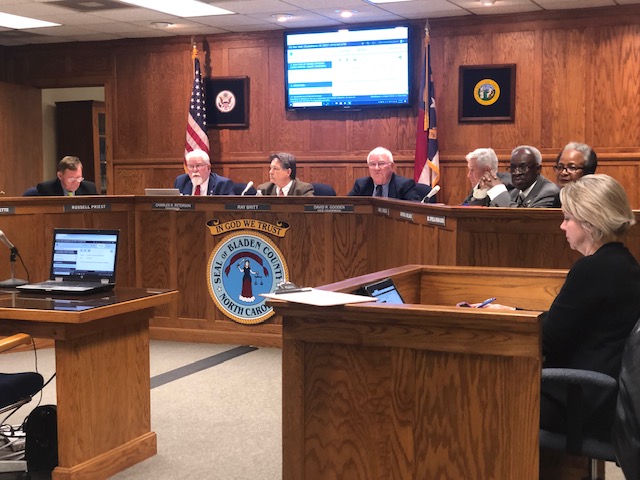 Mrs. Valeria Peacock-McKoy, Persandra J. McKinley and Cynthina McKoy, were all recognized for their years of service to the county. Each retired on Jan. 1, 2020. 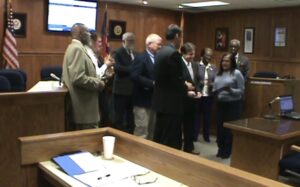 The first to accept their plaque was Mrs. Peacock-McKoy. She was recognized for her service as Assistant Deputy Director at the Board of Elections from September 2014 through December 2019 by the Bladen County Board of Commissioners.

Bladen County Manager Greg Martin explained Valeria came to the area from the Columbus County Elections office and a year ago became the Interim Director at the Board of Election’s office and she served faithfully.

Chairman of the Board of Commissioners Ray Britt said, “She did an exceptionally, good job!”

Mrs. McKoy provided five years of dedicated service at the Bladen County Board of Elections office during her tenure, according to the commissioners.

Britt added, “It’s an honor to know you,” as he shook Mrs. Peacock-McKoy’s hand.

Next, Ms. Persandra J. McKinley was recognized for her dedicated service. Mrs. McKinley’s retirement came January 1, 2020 after having served the citizens of Bladen County for twenty-four (24) years as Processing Assistant III. 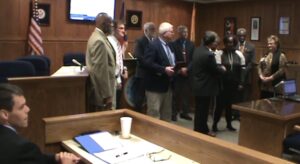 Commissioner Britt thanked Ms. McKinley on behalf of the Board of Commissioners for all her years of service. He added, “We wish you well.”

Bladen County Health and Human Services Director, Dr. Terri Duncan made remarks about Ms. McKinley as well. “She has a heart for children,” Dr. Duncan stated, “for just shy of 25 years she worked for the Women’s, infants, and children’s program here in the county.”

Although Ms. McKinley had the opportunity to move to other departments, she stayed where her heart was at, according to Dr. Duncan and was called “Grandma” by the children and some of the staff.

Ms. Cynthia McKoy provided twenty-seven (27) years of dedicated service, most recently in the role of Payroll Specialist. Mr. Britt also thanked Ms. McKoy for her faithful service to the County. “We greatly appreciate you. You have been a great example to all the employees by showing up to work on time, every time!,” Mr. Britt told her while handing her the plaque of recognition. 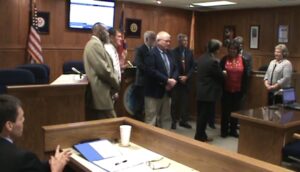 Ms. Lisa Coleman spoke on behalf of Ms. McKoy’s work ethic and dedication. Ms. McKoy started working for the county in the early 1990’s and was promoted within the county. “She worked her way up to Payroll Specialist,” Ms. Coleman said, “and she has excelled at the position.”

Ms. McKoy received well wishes from all those in attendance.

After the recognitions were given the commissioners were addressed by Blueberry Farmers and their friend and local attorney, Mr. Leslie Johnson. Bill Augustine and Ralph Carter along with other Blueberry Farmers were in attendance to discuss the damage the blueberry farming industry have faced since the bad freeze of 2017 and the hurricanes. The farmers were facing non-support because they did not harvest back, but they argued there was nothing to harvest.

The Blueberry Farmers of Bladen County asked the commissioners for a letter of support to help them with the funding issues from the Farm Service Agency (FSA). 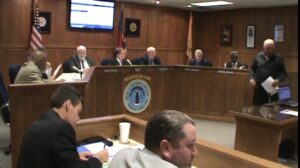 Commissioner Charles Ray Peterson made the motion to support the farmers with a letter and Commissioner Daniel Dowless seconded the motion.

Commissioner Michael Cogdell asked, “Who made the determination about the crops.” One of the farmers explained auditors came to the farms and saw there was nothing to harvest.

Commissioner Arthur Bullock stated that it sounded like the FSA was not taking the farmer’s professional opinion.

Commissioner Cogdell also asked if a letter should be sent to the North Carolina Agriculture center. The commissioners agreed to send letters to all the State and Federal elected officials as well.

There have been some change in leadership in Raleigh according to Dowless which has caused the processes to start moving faster. View the full report here.

There was a Subgrant Management Costs sheet, Dowless provided.

An applicate agreement with the State for Dorian Disaster Relief and a resolution designating applicant’s agent regarding Hurricane Dorian were both presented to the board by Mr. Dowless as well.

The Board of Commissioners approved all Mr. Dowless asked them to consider.

The commissioners were asked to consider three appointments to three-year terms, with the terms expiring December 31, 2022. The current Bladen County Economic Development Commission may be found here.

At the February 17, 2020 meeting the commissioners will be asked to consider two appointments to three-year terms of service, with terms expiring February 28, 2023 for the Bladen County Nursing Home Advisory Committee.

The Bladen County Calendar for January and February was announced by Mr. Martin.

View the meetings below.