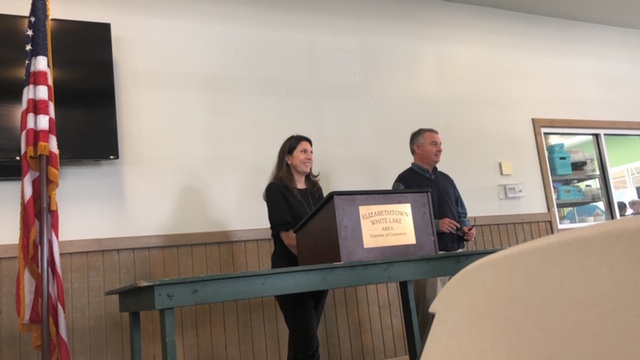 Heustess gave a report on the economic development in the county. Heustess spoke about Provalus, a information technology company not choosing Bladen County to grow their industry in. However, he did state Bladen Community College held a job fair for the company with an outpouring of interest.

Heustess also spoke about the company, Chemours Fayetteville Works site in Bladen County completing the new facility to reduce the air emissions of Gen X and other PFAS a month early and the millions of dollars the company invests in the area.

Smithfield was next on Heustess’ list. According to his report, in the last year Smithfield added 330 jobs to the area and is now making renewable energy.

TThe transition into economic development in Bladenboro was added to his agenda. A company offering smoked turkey legs will be employing 30 jobs. He added, the Town of Bladenboro and Boost the Boro, Inc. have been working hard to revitalize the area. Heustess asked anyone interested in having a business in the downtown area of Bladenboro to contact his office.

Heustess’ went back to economic development in Elizabethtown. He discussed the spec buildings and building a live, work and play area in the industrial park.

Finally, ending his talk, Heustess gave an update on the incubator in Elizabethtown. Bladen Community College Small Business Center, the Elizabethtown-White Lake Area Chamber of Commerce and two other small women owned businesses currently in the incubator. If anyone is interested in starting a small business in the renovated building they are asked to call the economic development office.

Clarendon, SC lands deal with IT outsourcing company instead of Bladen County, NC