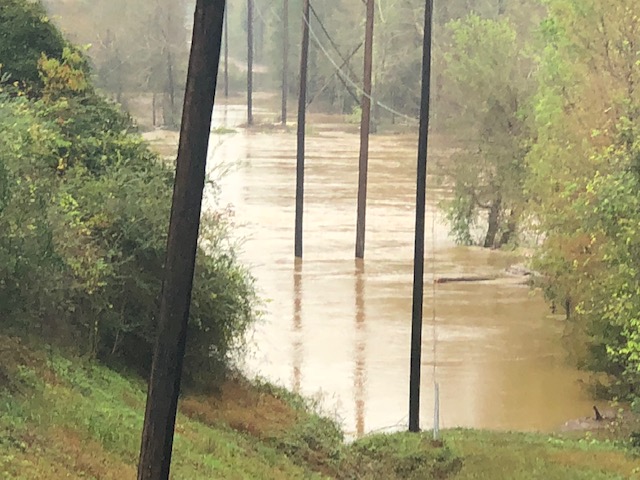 Bladen County experienced an extreme year in terms of rainfall for 2018. According to statistics available from the U.S. Climate Data website, Bladen County receives on average 49.27 inches of rain.

Bladen County Emergency Management Director Bradley Kinlaw said without Hurricane Florence, the year for 2018 would not have been that bad as far as the rainfall totals.

“We normally like to have rain in the fall and spring for wildfire season,” said Kinlaw.

He said the rain generally doesn’t hamper efforts in terms of Emergency Management and emergency response with the exception of the occasional ambulance becoming stuck in someone’s yard or driveway.

Kinlaw said the Cape Fear River has remained high since Hurricane Florence. Emergency Management has kept a watchful eye on the river levels. He said as of Tuesday, if the county were to receive a storm that dropped ten or more inches of rain, Emergency officials could be dealing with severe flooding once more.

“That is unbelievable. It has been a long time since we’ve had that much rain,” said Elizabethtown Mayor Sylvia Campbell.

In Elizabethtown, the City Cemetery suffered geological damage from the shifting of soil caused by the large amount of rainfall during Hurricane Florence.

In Bladenboro, Town Administrator Blake Proctor said he is keeping a watchful eye on the ditches and creeks in the town due to all of the rain that has already fallen but also the rain that continues to fall.

“With all of the rainfall we have had, the ground is saturated. There is no place for the water to seep in,” said Proctor.

He added there has been no flooding in the downtown and the streets are fine.

“I’ve been out monitoring and looking at ditch levels,” said Proctor.

He said Wateree Creek is fairly low, so it is able to handle the rainfall fairly well.

According to a report called the National Climate Assessment, extreme rainfall may become more of a normal event rather than an anomaly. The southeastern United States is seeing impacts from rising sea levels, extreme weather events and increasing temperatures. The document also states the number of extreme rainfall events is increasing.

“The decade of the 2010s through 2017 has been warmer than any previous decade,” reads the document.

In Wilmington, a new weather record was set when New Hanover County ended 2018 with more than 100 inches of rain.