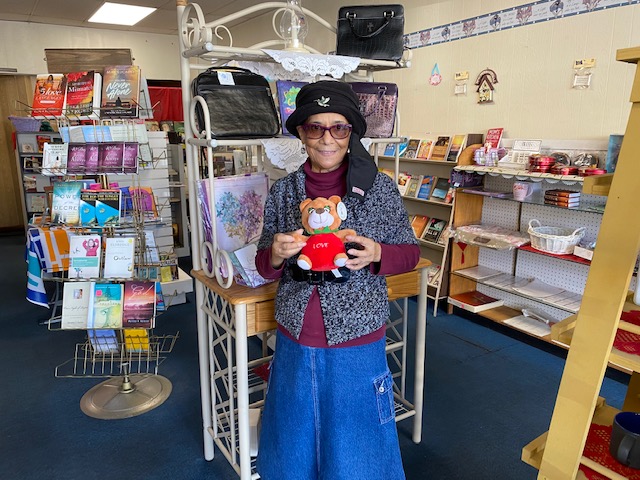 The photo above is of Ms. Mildred Jackson, owner of Faith Partners Christian Supply Store

Closing out February and Black History Month, the spotlight is shining on the long-standing, local, African American-owned businesses. Several businesses have endured the test of time and have been willing to share their experiences.

“Traveling from Whiteville to Elizabethtown was my biggest challenge when I first started,” Ms. Johnson said.

She said one quote that has helped her through the years is, “The will of God will never lead you where the grace of God will not keep you.”

Her struggles have been when her husband passed away, when her store went through hurricanes, and when she faced financial difficulties.

She said a man from West Virginia came into town one day when she was very discouraged and thinking about closing the store because she didn’t have much merchandise. The man told her he wanted to bless her then gave her a large variety of inventory to stay open.

The act of kindness lifted her spirits. Ms. Johnson continues to offer a variety of goods at her store while promoting others as well. She is always ready to give a smile and a word of encouragement.

Another prominent business to recognize is Cape Fear Turf Farm, located at 1845 Elwell Ferry Road in Council, N.C. The farm has over 800 acres of sod farm and 12 full-time employees. Garris “Pistol” McLean owns the company, and in 2019, McLean was honored by the Bladen County Board of County Commissioners for all his accomplishments and community service. Mr. McLean is one of the largest producers of warm-season grasses in the southeastern region of North Carolina. He is the first known African American sod producer in Bladen and Columbus Counties.

Mr. McLean served his community and county coaching softball for over twenty years. During this time, Mr. McLean was inducted into the Peters Creek Softball hall of fame. Mr. McLean was employed at a turf farm for twenty-five years, serving thirteen of those years as Farm Manager, and in 2000, Mr. McLean was presented an opportunity and accepted the challenge. Cape Fear Turf Farm was founded, with assets of twenty-five acres of sod and two employees, including himself.

F.W. Newton & Sons Mortuary continues to operate as an expanded family-owned business that started in the 1960s. F.W. Newton, Jr. explained his dad started the business back in the late 1960’s. The local branch is located at 403 Martin Street in Elizabethtown, N.C. Mr. Newton, Jr. has continued in his father’s footsteps since 2014.

He expounded on the differences his industry has seen over the years. “Funerals are a lot more mobile and flexible now,” he stated.

He learned a lot from his father. “I just remember a lot of times when I was growing up; I was watching my father listening and helping families through their needs.”

Even more significant changes have immerged since the COVID-19 Pandemic, and Mr. Newton has been working overtime hours to help. He has been assisting in embalming or cremating the remains of COVID-19 victims across the state.

Early during the Pandemic, in an interview, Mr. Newton stated, “No one wants to do it, because they’re afraid of it. They don’t understand it, and for good reason.”

He has to take particular precautions even though he already has training in universal precautions in handling any remains from contagious to infectious diseases. 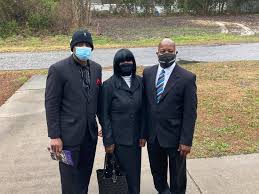 Mr. Newton and his team continue to offer a variety of mortuary services across North Carolina.

The Pandemic has hit many business owners hard. However, the personal care industry was impacted drastically due to COVID-19.

Albert Lewis, Jr. has been a life-long resident of Bladen County and has been in business for 30 years. He owns Headquarters Barber Styling shop at 156 S. Poplar Street in Elizabethtown. For decades, Lewis and his team have worked to keep men styled and groomed. Then in 2020, the shelter-in-place orders and the safer at home policy due to the Pandemic took Lewis by surprise.

Last year in an interview, Lewis admitted that it had been tough to get through.

He said, “I’d never have thought I’d be able to survive being shut down for months, and if not for some friends, and people of faith, I wouldn’t have, but God is good.”

His shop was closed from March 25 to May 26, 2020. This year is off to a better start for Lewis and his stylists at Headquarters Barber Styling shop.

“We are so thankful for the love and support,” they posted on their social media page.

Headquarters Barber Styling shop implemented more safety precautions once they were allowed to reopen. Men young and old go into the shop now thankful for the services keeping them stylish and dapper.

These are only a handful of locally owned and operated successful businesses to mention during this time of reflection. When searching for things to celebrate and admire, changes do not seem that hard to endure.