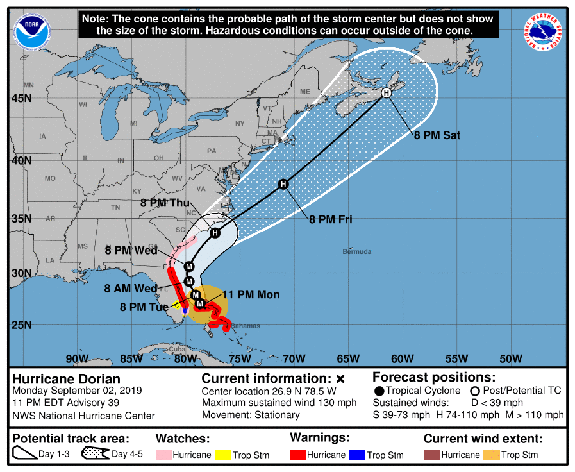 Dorian has been a tough storm to pin down, but it appears the slow-moving hurricane that has spent the past two days pounding the Bahamas has begun its trek toward the east coast.

Bladen County could begin feeling its effects overnight Wednesday and into Thursday with tropical storm winds and heavy rain, according to the National Weather Service’s Wilmington office.

No warnings or watching had been issued by the National Hurricane Center as of late Monday night.

At 11 p.m. Monday, Dorian was about 100 miles east of West Palm Beach, Florida with maximum sustained winds of 130 mph, according to the National Hurricane Center. It was still stationary and continued to pound Grand Bahama Island.

A slow northwestward motion is expected to occur early Tuesday, the NHC advisory said. A turn toward the north is forecast by late Tuesday, with a northeastward motion forecast to begin by Wednesday night.

On this track, the core of Dorian was expected pummel Grand Bahama Island into Tuesday morning. The hurricane will then move close to the Florida east coast late Tuesday through Wednesday evening, very near the Georgia and South Carolina coasts Wednesday night and Thursday, and near or over the North Carolina coast late Thursday and Friday.

Bladen County may receive tropical storm winds of 40 to 50 mph by Thursday with a potential for between 4 and 6 inches of rain, according to a briefing report prepared by the weather service’s Wilmington office.

Potential impacts with the wind include downed trees and power lines along with some property damage, especially to weak structures, fences and blown-down signs, the report said.

Bladen County Schools is monitoring the storm, but no classes had been canceled as of late Monday night. New Hanover County Schools will be closed for students on Wednesday. Methodist University in Fayetteville and UNC Wilmington have canceled classes for the remainder of the week.

Dare County on North Carolina’s Outer Banks has ordered a mandatory evacuation for all visitors beginning Tuesday at noon and for all residents beginning Wednesday at 6 a.m.

Governor Roy Cooper has beclared a state of emergency, which allows state resources to be mobilized and lets the state and local governments seek federal aid, according to the Governor’s office.

“I urge you to closely follow the forecast and listen to your local officials,” said Governor Cooper. “If they order an evacuation please follow their instructions.”

“North Carolina has endured flooding from two strong hurricanes in less than three years,” Cooper said. “Now is the time to prepare for Dorian. To the people of North Carolina, particularly those still recovering in the eastern part of our state, we are working hard to prepare and we are with you.”

U.S. Senator Thom Tillis said Monday night that President Donald Trump him that North Carolina will have the full resources of the federal government to respond to the storm.