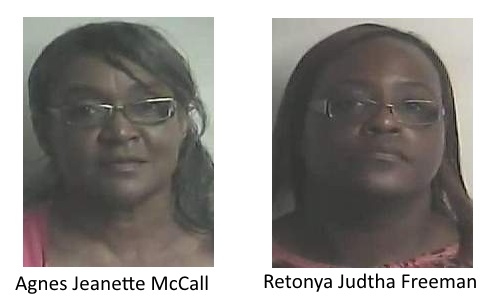 According to a news release from the Bladen County Sheriff’s Department two women have been
arrested and charged with embezzlement from a Bladen County Church. Officials report one of the women charged is 59 year old, Agnes Jeanette McCall, the church’s treasurer from Bladenboro.
A Bladen County Library representative confirmed that McCall is the current Bladen County Library Assistant Director. McCall is under a $29,000 bond and was charged with five (5) counts of embezzlement and three (3) counts of accessory before the fact to a felony.
The other woman arrested is 38 year old, Retonya Judtha Freeman, a former minister from Raleigh. Freeman is charged with seven counts of embezzlement and booked into Bladen County Jail under a $36,000 bond.
According to the news release and officials the investigation began back 2009 when Mt. Pisgah Church members reported funds missing from the church’s bank account and continued through 2013. According to Sheriff Jim McVicker over $70,000 was embezzled from the church’s coffers. According to officials, both individuals made bond and were scheduled to have a first appearance hearing in Bladen County District Court on Thursday, June 11.
“Cases like this are hard for a congregation who has put their trust in these individuals,” said McVicker. “Too many times these type cases go unreported out of embarrassment or fear of adverse publicity for the church. I am glad this church came forward to report this crime and work with us to find the proof of this act and hopefully find justice.”
Share on social media using short code: https://bladenonline.com/?p=16236
Share: