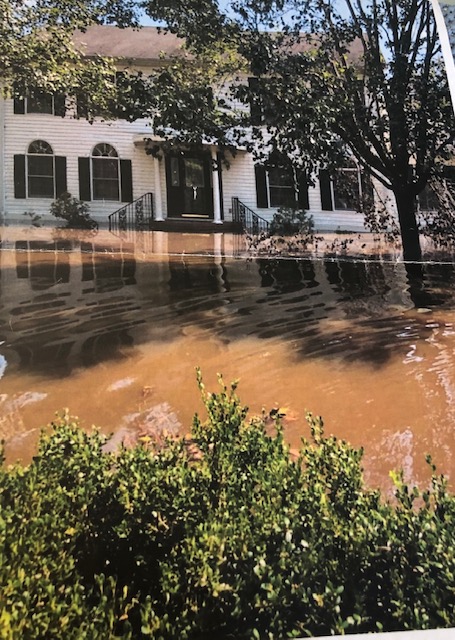 Residents in the community of Kelly are asking some hard questions about the aftermath Hurricane Florence. The biggest question seems to be, “Can someone help us?”

Numerous homes were flooded after the White Oak Dike was breached in several locations, allowing flood waters to stream into the town following Hurricane Florence. Both homes and businesses and the fire department and rescue building all were flooded as a result of the breach. 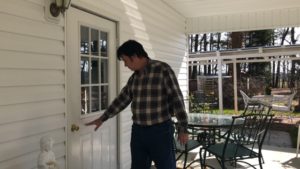 Terry Mitchell, who resides on White Oak Road in the Kelly community, is asking the hard question, “Can anyone help us?”

Mitchell was diagnosed with a vestibular schwannoma acoustic tumor prior to the storm. He had been treated at Wake Baptist Hospital in Winston-Salem prior to the storm’s arrival. He said he watched as weather forecasters followed the progress of the storm and listened to advisories and announcements regarding the storm. Mitchell said he finally decided that due to the tumor and the medical procedure he underwent coupled with the low barometric pressure of the storm, he needed to evacuate. Mitchell said he traveled to the western part of the state.

“I was getting reports of the storm from back home,” said Mitchell.

He said a nephew called and told him there was water in the yard. “I was surprised. In Hurricane Matthew I did well,” said Mitchell.

Then later that evening, at around 8 p.m. he received a call from his sister, that her home in Wilmington was devastated following a tree falling on it.

“She said can you help me?” recounted an emotional Mitchell. He said he was able to call some friends to go and help his sister. But it was another piece of information his sister relayed that was the most devastating, the White Oak Dike had broken and water had flooded the garage of his home and was underneath the house.

“The last thing I thought of was having a flood so that bit of information was a terrible let down,” said Mitchell.

His home is located about one mile from the Cape Fear River. Mitchell said, in addition to damages in the garage, while no water penetrated the home, there was some mold growing along the baseboards that had to be cleaned.

He said when he was able to return to Bladen County, he stayed at White Lake and spent numerous days, traveling to his home in Kelly to work. Mitchell said about three feet of water entered the garage. He was assisted by the Baptists on Mission in cleaning out the garage and removing ruined items. He said there were family heirlooms, antiques, equipment, tractors and more in the garage that were lost to the flood waters.

Mitchell said while no water penetrated the home there was some mold growing along the baseboards that had to be cleaned. He said three heating and air conditioning units had to be replaced along with insulation. The floor in the dining room also buckled.

Now that his house and garage have been restored to some semblance of order, Mitchell is wondering what will become of the White Oak Dike.

“I never thought I would see such a thing,” said Mitchell.

He said his experience with FEMA was trying as well. Mitchell said the FEMA representative who came out asked if he had a problem with relocating, he explained to him that sounded permanent so he said, “No.” Then he received a telephone call from a different FEMA representative who explained that the relocation question was to offer temporary housing assistance. Mitchell said he did eventually get some assistance from FEMA.

He said the concern now is getting the White Oak Dike reestablished before another storm arrives. Mitchell said when the White Oak Dike was first constructed, there was legislation established that allowed residents in Kelly to be taxed  at a rate of 0.10 cents per $100 of valuation to help pay for maintenance of the dike. There is also supposed to be a three member panel that oversees the White Oak Dike.

Mitchell said over the years, the trees grew up, the dike was punctured for water diversions and people crossing over the dike eventually weakened the structure. When Hurricane Florence arrived, the White Oak Dike was breached.

“If the dike was reconstructed, I could rest reasonably well,” said Mitchell.

He adds, he is looking at the possibility of relocating, but it is a very difficult proposition. Mitchell’s burning question: “Can someone help us (rebuild the dike)?”

A message left with US Army Corps of Engineers was not returned as of press time.