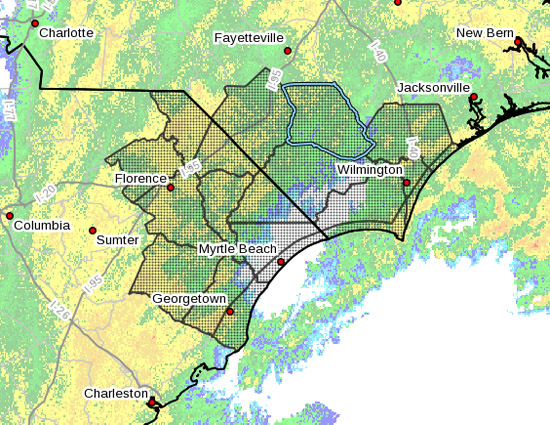 Bladen County is under a tropical storm warning as Ian is expected to impact eastern North and South Carolina on Friday and into Friday night.

The National Weather Service also has issued a flood watch for Bladen County until 2 a.m. Saturday as excessive rainfall from the storm is expected.

As of 6 a.m. Friday, the National Weather Service reported that Ian was about 250 miles south-southwest of Wilmington or about 200 miles south of Myrtle Beach S.C. with winds reaching 85 mph. The storm was moving north-northeast at 9 mph.

Bladen County is forecast to receive winds between 30 and 40 mph with gusts up to 60 mph possible, according to the latest statement from the National Weather Service.

Bladen County announced Thursday that is Emergency Operations Center was opening Friday from 7 a.m. until 7 p.m. with extended hours dependent upon storm impact.

Bladen County Schools opted to make Friday a remote learning day. Students were expected to receive assignments from teachers Thursday. The school system canceled all after-school activities Thursday, including the East Bladen at West Bladen football game. The game has been moved to Monday at 6 p.m.

Ian was moving north over the Atlantic waters off of the southeast coast and will make landfall over South Carolina as a hurricane later Friday before rapidly weakening as it heads northwest through the Carolinas toward the mountains, according to the latest advisory from the National Weather Service.

The greatest impacts will last into Friday night, increasing gusty winds expected to reach tropical-storm-force with mainly hurricane force gusts. There is potential for hurricane force winds as well, mainly near the coast of South Carolina.