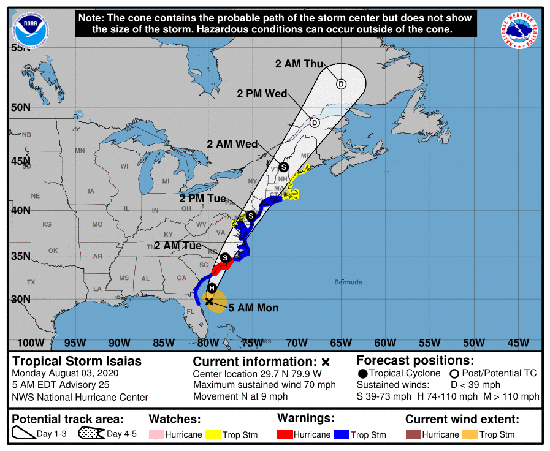 The National Weather Service issued a tropical storm warning for Bladen County on Sunday as Tropical Storm Isaias moves toward North Carolina. The warning means tropical storm-force winds are expected within the area within the next 36 hours.

As of 5 a.m. Monday, Isaias was about 280 miles south-southwest of Myrtle Beach, South Carolina with winds as high as 70 mph. The storm was moving north at 9 mph.

The most significant impacts are expected to occur late Monday into Tuesday morning. These impacts include the potential for tornadoes and tropical storm force winds, mainly east of I-95, along with heavy rainfall.

The National Weather Service also has issued a flash flood watch that includes Bladen County from Monday morning through Tuesday afternoon because of excessive rainfall expected from Isaias.