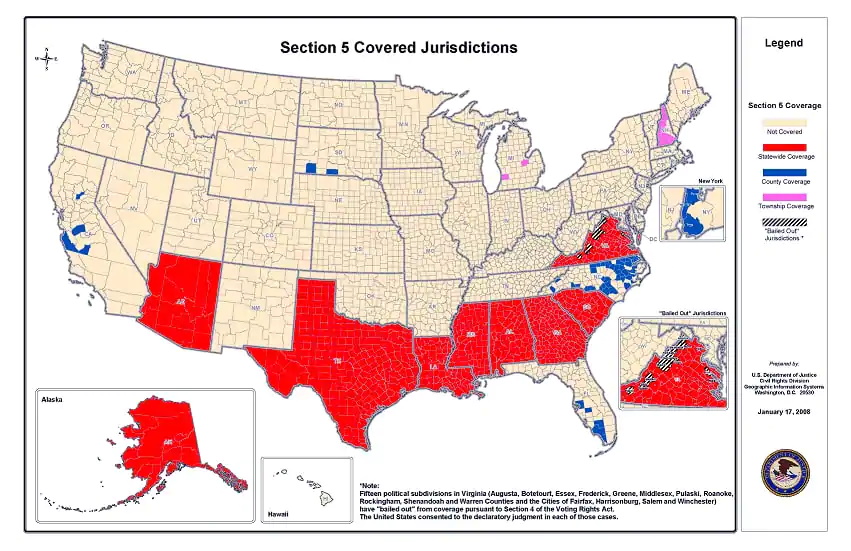 There are three districts in the county. Each district receives two seats on each board. Therefore a single voter may vote for two district board members and one countywide board member.

In the 1980’s, the Department of Justice approved and changed the boards’ format in Bladen County to nine members for the Board of Education and the Board of County Commissioner and limited voting as a result of a lawsuit involving the Voting Rights Act of 1965. The ruling was to prohibit all forms of racial discrimination.

In June 2013, the United States Supreme Court declared in Shelby County v. Holder, Section 4 of the Voting Rights Act of 1965, unconstitutional. The court ruled in a vote of 5-4 that Section 4, which used data from the 1960s and 1970s to provide a “coverage formula” for Section 5, could “no longer be used.”

According to some law experts, the ruling on Section 4 made Section 5 unenforceable. The Brennan Center reported, in 2013, a ruling by the Supreme Court made Section 5 “inoperable until Congress enacts a new coverage formula” because Section 4 of the Voting Rights Act was determined to be unconstitutional.

Bladen County is one of the counties in the coverage area noted in Section 5. Therefore, some local citizens question the validity of the election format used today.

On the other hand, some experts maintain Bladen is still required to follow through on a pre-clearance to void the number of board members and the voting format.

An article written by Robert Joyce in 2013 explains a bailout process. In the article, Joyce writes, “It is possible for a jurisdiction, such as a county or a city within the county, to “bailout,” or get itself out from under, the pre-clearance requirements of Section 5.

Joyce’s recommendations state, “Generally, in order to bail out, the jurisdiction must show the federal district court for the District of Columbia that for the previous ten years (1) it has not been found in violation of the Voting Rights Act, (2) it has not used a discriminatory procedure, (3) it has precleared all changes that were required to be precleared, and (4) it has taken positive steps to increase participation by minorities in the election process. Only one North Carolina jurisdiction—Kings Mountain—has gone through the bailout process.”

Bladen County Board of Commissioners — Reportedly a consent order entered by Judge Franklin Dupree in April 1988 in Harry v. Bladen County, North Carolina, US Dist Ct, EDNC, No. 87-72-CIV-7, is the basis for a nine-member board, with two members elected from each of three districts and three members elected at large with limited voting. The at-large seats are to be elected as a group in a plurality election in which each voter is limited to voting for one candidate. This election method is codified in Session Law 1987-926, enacted in June 1988.

Bladen County Board of Education — Reportedly a consent order entered by Judge Franklin Dupree in April 1988 in Harry v. Bladen County, North Carolina, US Dist Ct, EDNC, No. 87-72-CIV-7, as discussed above for the Bladen County Board of Commissioners, also affected the election of the county school board. Whether or not the order specifically addressed the school board, reportedly the board on April 21, 1988, adopted a resolution stating that it would follow the same election method as the county commissioners, i.e., a nine-member board with two members elected from each of three districts and three members elected at large with limited voting. This election method is codified in Session Law 1989-29 which says that it was derived from the federal court order. Because of the uncertainty of the court’s involvement in the origin of the school board election method, it is not clear whether the board remains subject to court control.