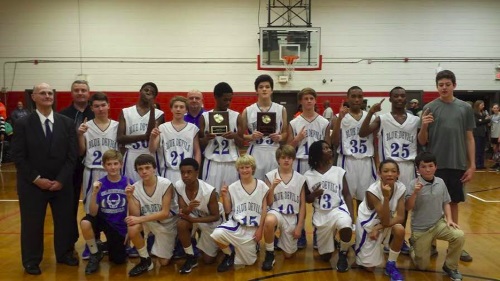 Elizabethtown jumped out to a quick 8-0 lead early in the first quarter. Pierce Melvin got a steal and lay-up during the period.  Avery bombed two long three pointers and hit four free throws to give Clarkton a slim 12-10 lead after the first quarter.

Early in the second period, Seven Campbell worked inside for a basket.  Clarkton increased the lead with more hot outside shooting.  Greyson Heustess and Avery nailed two three pointers each to push Clarkton to a 26-16 halftime lead.

During the third period, Campbell added another inside bucket and free throw.  Avery continued his hot shooting with two driving layups and four made free throws to close the third quarter with Clarkton leading 36-23.

In the fourth quarter, Teyshaun Berkeley score on the inside.  Elizabethtown rallied to close the deficit to single digits before Heustess swished another three pointer.  Avery hit six free throws during the final minutes.  Clarkton ran out the clock to capture the victory.

Clarkton completes the season as undefeated regular season and tournament champions.  The game was the final basketball game for Coach Darrell Melvin who is retiring.