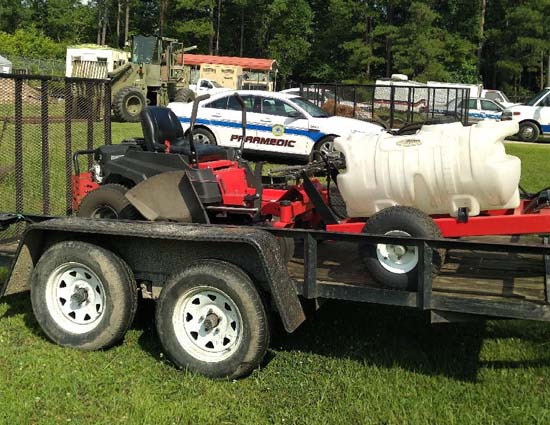 A stolen mower and trailer were recovered and returned to the owner after an off-duty deputy saw a person he knew to be involved with stolen property pulling the items, according to the Bladen County Sheriff’s Office.

At about 9 p.m. on Friday, July 4, the off-duty deputy saw a vehicle turn onto Harrelson Road off U.S. 701 and notified on-duty deputies, according to the Sheriff’s Office.

An investigation found that the zero turn lawn mower and trailer had been reported stolen several weeks earlier from a home off Guyton Road, the news release said.

The property was returned to the owner and warrants have been issued for the suspect, the Sheriff’s Office said. The names of the property owner, suspect and the off-duty deputy was not available.

“Our deputies are never off duty,” Sheriff Jim McVicker said. “I want to commend the great job our officers did in recognizing this stolen property, following up on the information, and recovering it for the owner”.

Anyone with information on stolen property is asked to contact the Sheriff’s Office at (910) 862-6960.