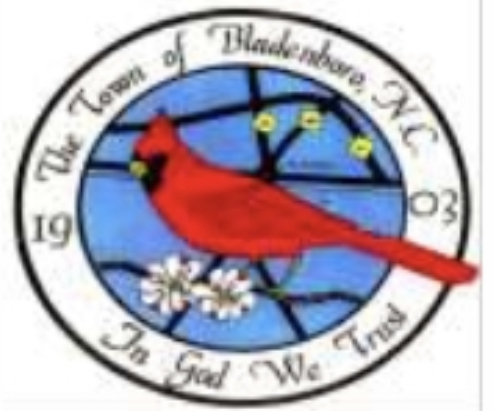 Bladeboro’s monthly follies began with Mayor Rufus Duckworth gaveling the meeting to order at 6 pm. Commissioner Greg Sykes provided the invocation, and attendees stood for the Pledge of Allegiance.

No one appeared for the Open Forum, and the Consent Agenda was quickly dispatched. With no Unfinished Business to attend to, the Board dug into the ten items of New Business.

Mayor pro tem Stephanie Thurman had requested an update on the status of Commissioners’ discretionary funds. Town Administrator Oryan Lowry provided a matrix showing each Commissioner’s expenditures and their balances.

While Commissioner Thurman had spent none of her $600 allocation, the Mayor had given his entire $800 to Boost the Boro for the downtown stage.

Commissioner Lisa Levy had donated $300 to the Spaulding-Monroe School. Commissioners John Bowen, Jeff Atkinson, Sarah Benson, and Greg Sykes had each given $300 to the Bladenboro Historical Society. All five Commissioners still each had a $300 balance.

The Mayor then read a proclamation honoring Annie Vivian Bonners 90th birthday on April 16th. Ms. Bonner was born and raised in the ‘Boro, graduating from Spaulding-Monroe High School in 1949. She later moved to Washington DC, where she resides to this day. Happy birthday, Ms. Annie!

Town Administrator Lowry announced that he and Commissioner Levy would be attending a Human Resources workshop for NC Rural Communities on April 27th; it has not yet been determined if this workshop will be virtual or in person.

There was a quick discussion of the federal government’s American Rescue Plan (ARP) to bolster the country’s communities, hard-hit by the Xi Jinpingfluenza pandemic. It was learned that Bladenboro would receive some $470,000 from this distribution.

John Tyler and David Simmons, representing CLC Financial, were on hand to introduce themselves and their firm to the Board, with the intent of seeking the Towns Major Medical insurance business.

A discussion ensued regarding the possibility of re-opening the Community Building for rent. It was decided that, with a normal capacity of 75, the restricted capacity would be 50 attendees; additionally, masks would be mandatory.

Mr. Lowry discussed the status of the McLean Park project and then presented bids for two phases of the project for the Board’s consideration.

With a bid of $81,150, Greg Johnson of Pal J Farms was awarded the combined-activity contract on the walking trail, parking lot, and sidewalks at the Park.

Duking it out for two field lighting contracts – for the grant-funded new softball field and lights for the off-grant little league field already built – Musco Sports Lighting of Oskaloosa, Iowa lost both bids to locally-owned Allegiance Electric, although both winning bids were higher.

The winning bid on the little league field was $168,208.39; and, for the new softball field, it was $192,465.59. An obvious factor in the award was that the local firm would be on hand for both warranty work and routine facility maintenance.

Also, a consideration on naming the award was that the County had already pledged $35,000 toward the softball field lighting, which lowered the price of the new field lighting to below the Musco bid and under budget on the PARTF grant.

Mr. Lowry’s request to be allowed to purchase a pickup truck for the Maintenance Department was quickly approved.

In the Administrator’s Report, Mr. Lowry first thanked Public Works and the Police Department for their concerted efforts to install temporary fencing at Wateree Park.

On the New Town Square project, Hickman Utilities will have the asbestos abatement completed within the next few days; demolition can then take place.

Once more on the McLean Park project, the drainage issues are being addressed; also, the fencing material has been delivered, and the fence layout and installation will begin on the 14th.

All the new generators are installed, and testing will begin on April 20th; the natural gas line will soon be installed at the Maintenance Shop for that one gas-powered generator.

Following that report, the Board went into executive session for the purpose of discussing personnel; upon exiting that closed session at 7:48 pm, instead of adjourning, the meeting was continued until 6 pm, Monday the 19th, for a budget workshop.