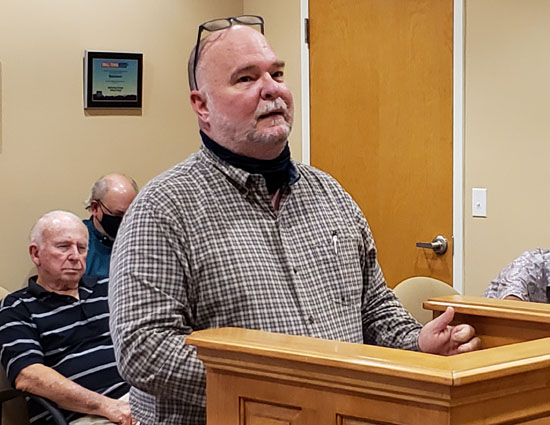 The Bladenboro Board of Commissioners on Monday night received a proposal to operate its water and wastewater management system, heard about building needs and programs offered at Spaulding-Monroe Cultural Center and delayed approving more funds for the completion of a community stage.

Also, the board twice went into closed session to discuss personnel issues, but, after at least 90 minutes, took no action in open session.

“The company was formed in 1997 as a water and wastewater management company that strictly focused on rural water systems across the state,” Envirolink representative David Strum (pictured above) told the board. “There’s such a big need for management of those systems.

“There are currently 144 distressed systems across the state of North Carolina,” Strum said. “There’s far more than 144, but that’s just what the state has deemed based on financial data. As we see it over and over again, there’s a lot of small towns that have a big need for water and wastewater management and that is what provide.”

Board members and town officials will study the proposal over the next week and have scheduled a meeting with Envirolink representatives on Monday, Sept. 20 at 6 p.m. 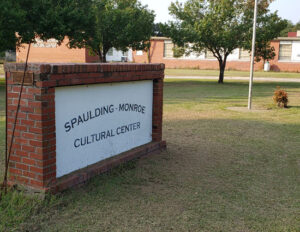 The Spaulding-Monroe Cultural Center on Martin Luther King Jr. Drive is in need of repairs. The center also wants to offer more activities.

According to a handout presented to the board Monday, the center’s purpose is to promote unity and health among the members of the Bladenboro community with a focus on children and families, promote health and fitness now and for generations to come, foster economic development and growth, and encourage and support good citizenship.

“In the midst of the pandemic (and hurricanes), we have been able to raise some funds, but it’s only enough to sustain the building and pay the bills,” Dale Blue-Singletary told the board. “We don’t have any real income source to help us. We’re not asking for us to receive help on a continous basis. We’re asking funds from the town in order to sustain the services that we want to provide. We will build in capacity so that we will be able to function on our own.”

According to Blue-Singletary, the building has mold and mildew issues along with water leakage. She estimated repairs and improvements would be $60,000.

“When we study and research children from birth to 8 years old and what we have found that children who do not receive services for health, education as well as dealing with trauma become victims of alcohol, substance abuse, drug abuse, school dropouts, obesity, heart disease and other types of trauma, including depression,” Blue-Singletary said.

“What we want to do at the Culture Center is to provide workshops where we provide education for families on how to deal with trauma, to provide them with resources on how to get services outside what they currently have and to help these children to become good citizens within Bladenboro and beyond.

We feel providing these type of resources will help unite the community more. The children in the community will be taught within the center how they can become contributing citizens in Bladenboro, in the county, in the state and in the country. They will be successful and healthy citizens.” Blue-Singletary said.

Spaulding-Monroe School was built in 1947. The school was closed in the early 2000s. The school’s Alumni Association received the deed for the property in 2004.

The board took no action on the requests.

The community stage the town is having built is unlikely to be finished in time for the Beast Fest in late October, the board was told. Funds and supplies are needed for the roof. The board took no action.

Beast Fest president Don White told the board that a stage has been rented for the event as in years past so the festival will not be affected due to the community stage not being completed.

In his town admistrator’s report, Oryan Lowry congratulated the Bladenboro Police Department for having an excellent field audit.

Lowry also updated the board on the Town Square project. “We’re finalizing the final drawings and we ran into some drainage issues because of the flooding,” Lowry said. “We should have the (plans) by the end of the week and, hopefully, out for bid by the end of the month.”

The town has asked for a six-month extension on its PARTF grant. Lowry said the playground equipment is not expected to ship until Sept. 22. Items left to complete at the park are a picnic shelter, roofs for the dugouts and a horseshoe pit.

Bladenboro has received $257,029.49 as half of its America Rescue Plan funding. “We have three years to utilize it,” Lowry said. “I know we continue to do our due dilengence and make sure we utilize those funds in a correct manner.”

Lowry also told the board that the 2020 census showed Bladenboro had a population loss of 997 since the 2010 census and the town’s population was 16,053. That made Bladenboro the 283rd largest town in North Carolina.

In other business, the board:

• Approved a memorandum of understanding for the Senior Nutrition Program.

• Approved the purchase of a new police vehicle for $34,782 to replace a vehicle that had been totaled.

• Requested more information before making a decision on a request to close a portion of Anne Street.

• Requested more cost estimates before awarding a contract for the upkeep of three ballfields and equipment maintenance.

• Approved a proclamation to recognize Halloween on Saturday, Oct. 30.

The board will continue the meeting Monday, Sept. 20 at 6 p.m. when it meets with representative from Envirolink. The next regularly scheduled meeting is Monday, Oct. 11.