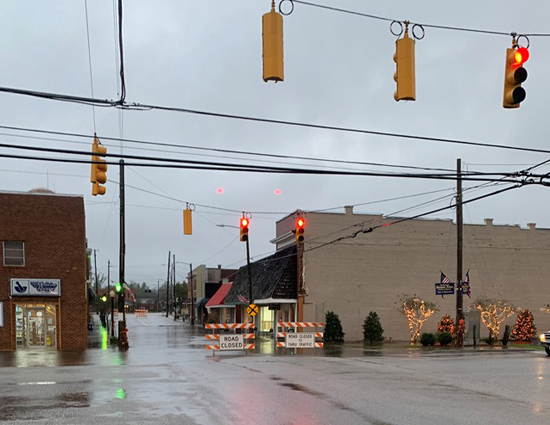 Bladenboro Weathers Yet Another Flooding

Not trying to be clever, but there’s been something very odd about autumns in Bladen County over the last few even-numbered years: Matthew in 2016; Florence in 2018; and Eta in just the past few days here in 2020. While both of the first two storms left us with 500-year floods, Eta’s two-day visit turned out to be much more of a here-and-gone affair, relatively speaking.

But don’t mention that to Rebecca Hester, owner of The Medicine Shoppe, who got two inches of water in her store. And don’t tell that to Steve Simmons or his early-morning coffee drinkers and noontime clientele at Diamond Dave’s, where five inches were dumped! While The Medicine Shoppe opened Friday morning, Diamond Dave’s remained closed for the day.

Sprinkling gently for a few days last week, and showering just a little bit less than a half inch onto the beleaguered town on Monday and Tuesday, Mother Nature buffeted the ‘Boro with over two-point-three inches during the day Wednesday.

Then came her crowning hours-long torrential pounding on Thursday, gifting the Town with over five-point-fifteen inches. Except for a few scattered showers later, the downpour actually ceased around Town by 6:45pm; but, the water kept a-flowing!

While the recently-dredged Bryant Swamp Canal never overflowed, the deluge at Wateree Creek inundated the entire Wateree Park, then went flowing an inch or two over West Seaboard Street to meet the culvert’s rushing waters on the other side; and since Wateree Creek also flows under Butler Mill Road, both of those flood areas would require detours.

Although the Canal never left its banks, the level of the water was still high enough that storm sewers and drainpipes flowing into the canal were below its surface; this of course resulted in the runoff from downtown having its own backup, flooding Main Street and adjacent businesses.

By 3:30pm Thursday, the Town’s Public Works crews, assisted by NCDOT since all the flooded streets are state roads, were barricading the flood-prone first block of South Main Street, Butler Mill Road from Edwards Street to West Seaboard Street, and Seaboard west to Edwards.

This reporter observed up close that, based on flotsam and trash in the street, the distance of the flooding reached as far south as the north corner of the old Housing Authority building, but by 7:30pm, had retreated to about Diamond Dave’s.

According to Chief Will Howell of the Bladenboro Police Department, the water had receded enough by 9pm that the barricades could be removed. Not a delightful experience, but better than either 2016 or 2018.