All I do is tell the stories, best as I can.

My friends in blue, gray, brown, red and green live the stories. So do their families.
A couple years back, while I was on the way home one afternoon, Trooper Kevin Conner called
me. Like many phone calls I have with the Highway Patrol, this one had to do with a fatal car
crash, caused by a young woman who was allegedly texting and driving. 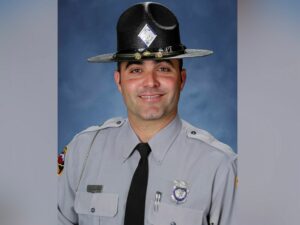 I asked Kevin to let me pull over, since I can’t take notes behind the wheel. He chuckled, and said
he was late calling me back because he had just pulled another young woman for “distracted
driving.”

She crossed into his lane while texting, and he managed to avoid a head-on collision. Naturally,
he turned around and hit the blue lights. The woman was crying when he reached her car, and
admitted she was texting and not paying attention. I don’t know the whole story – I didn’t ask –
but Kevin talked to her for a few minutes about her problem that almost became a catastrophe,
and let her go with a stern warning.

One reason that stuck out in my mind was because I got that call at the exact same place where
my wife barely avoided being hit in a similar situation. The mirror was knocked off her car, but
the young man stopped, backed up and apologized. She had a literal and metaphorical word of
prayer with him, then made him promise to leave the phone alone when he was behind the
wheel.

I wanted to share that story with Kevin, but I always neglected to do so. We rarely got the
chance to speak socially, since most of the time when I see a trooper or any law enforcement
officer, we were both busy with our jobs. I think he would have appreciated the coincidence of
our conversation about a common problem; like Kevin, my bride chose to give someone a break
when they were having a bad day.

I realize now I should have taken the time to tell him about Miss Rhonda’s experience, if for no
other reason to hear him laugh.

This is the second time I’ve had to write about a man I knew well who was killed in the line of
duty.

I got a message about Kevin’s shooting a minute or two after 1 a.m. that Wednesday morning. I
prayed that he would survive, and that no one else would be hurt. Then came the message I was
dreading, that he had died a long way from home in a hospital where people were desperately
trying to save his life.

There are a lot of both similarities and dissimilarities between this story and the first Line of
Duty (LOD) death I covered. The officer in that case, 27 years ago next month, was Donald Ray
Tucker.

Like Kevin, Donald liked people, and wanted to protect his community. Physically, Donald was
one of the most intimidating men I have ever know. His skin was darker than most African
Americans, but his entire image changed when he smiled that lop-sided, shining smile. Like
Kevin, he smiled with his whole face, especially his eyes – friendly, a hint of mischief, and happy.
Like Kevin, Donald loved kids; Donald never got to meet his own child, but I’d be willing to bet
he would have been a dad like Kevin.

What mattered in 1991, and what mattered in 2018, is the evil we have not only allowed into
our society, but welcomed into the living room for a glass of tea. We have allowed people to
demonize the law and those who enforce the law, and glamorized lawbreakers.

I was speaking with a veteran deputy Friday, and his word still haunt me.

“That guy didn’t shoot Kevin Conner,” the deputy said. “He didn’t just shoot at a badge. He shot
society. He was shooting at all of us.”

This has to stop, people. Not on my account. On our account, as a society.
I don’t care about color. I don’t really care if someone thinks they’ve had a hard time, ergo they
deserve a pass for breaking the rules which allow society to function. I don’t care if people are
silly enough to allow Hollywood to romanticize crime and make it cool.

I don’t care if someone thinks I owe them special treatment.
I don’t owe them a summer poor possum pelt. You don’t, either.

I care about the kids with no raising, who become permanent entries in my master crime file, or
end up with their own folder of notes and warrants. I care about the other kids who grow up
without a mother’s touch or a daddy’s laugh.

I care about the kids without godly fathers and mothers, who grow up to be ungodly people, and
do ungodly things.

We have to fix this, people.

We have to teach children that life isn’t always fair, but that doesn’t give you the right to break
the law. At the same time, the law does give you the right to have the chance to succeed if you
truly do your best. Bent and banged as the system is, it’s still the best in the world. If someone is
accused of a crime, the state has to prove beyond the shadow of a doubt that the person is guilty.
There is no justice when someone decides, randomly or after deep thought, that someone else
deserves killin’ for just being there. And yes, that works both ways.

Remember, folks, the justice system is what differentiates between us and them. We have no
moral authority without the law and the courts.

We also have a responsibility to ensure that we, as American voters, are good stewards of that
legal system.

From the solons who make the laws to the judges who apply them, to the boards who hire the
chief LEOs and the elected LEOs who determine enforcement strategy — we have to elect the
people who among other jobs, are responsible for the safety of our community, and if need be
the enforcement of the laws we as voters endorse.

The constitution doesn’t give anyone the right to call for lynching. Mob rule is satisfying on the
gut level, but it ain’t no better than what the criminals do.

We are better than the vermin. Remember that.

Kevin, Donald and all those who went before them are better than that.

My heart still hurts for Miranda, those beautiful children, and all of Kevin’s family. I
hurt for us as a society, too, because any time someone kills a law enforcement
officer, they are shooting at much more than a cop. They are trying to kill America.