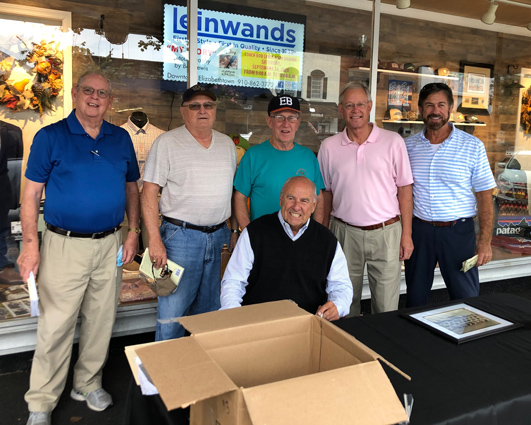 Former East Bladen football coach Bob Lewis was at Leinwands on Saturday to sign copies of his autobiography “My Story.” The book contains Lewis’ recollections from his 42 years of coaching varsity football that included stops at East Bladen, Pender, Clinton, Harrells Christian and Whiteville.

Among the people who turned out for the event Saturday was the crew who used to work in the press box at East Bladen. Pictured with Lewis, who is seated, from left, are Robert G. Hester, Jim McLaney, Chicky Robbins, Lyn Shaw and Ricky Leinwand.

Lewis, a native of Burgaw, began his coaching career with a middle school job in Clinton before moving to the varsity level at East Bladen in 1972. He remained there through 1979 before leaving to take the head football job at Pender.