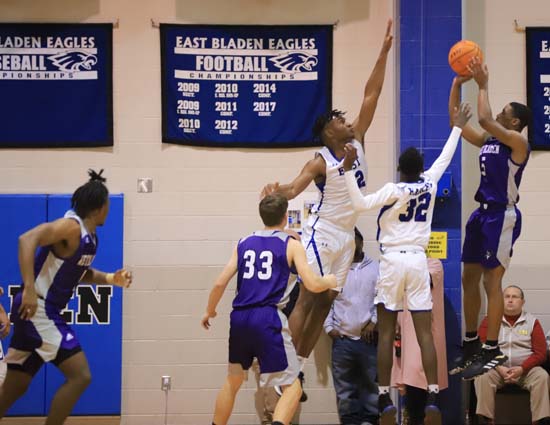 With the score knotted 33-33, senior Juwan Baldwin tapped in a rebound that beat the third quarter buzzer and gave the Eagles a 35-33 lead. Wooten sank 4 free throws, senior Tayshaun Berkeley made 2 free throws, and junior RaSean McKoy hit one as the East lead grew to 42-34. 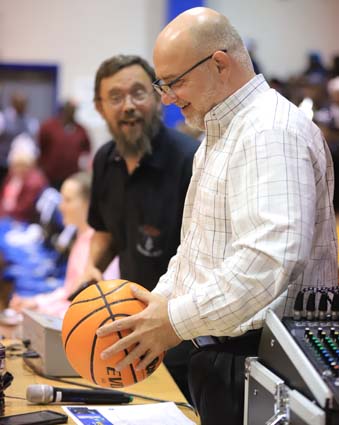 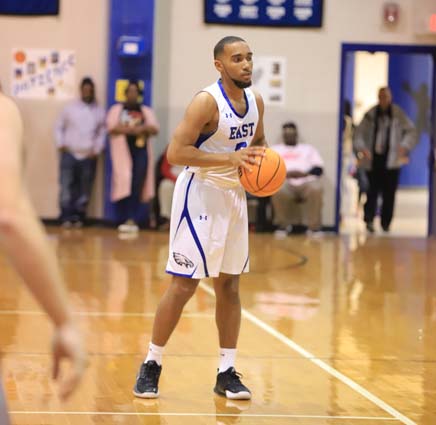 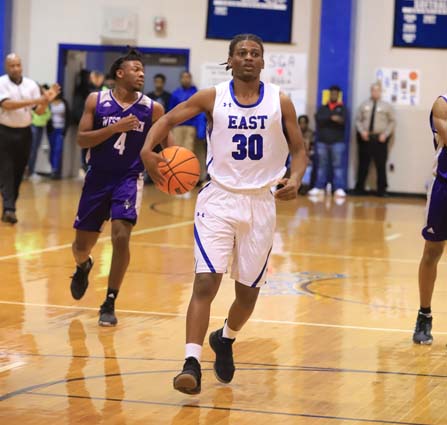 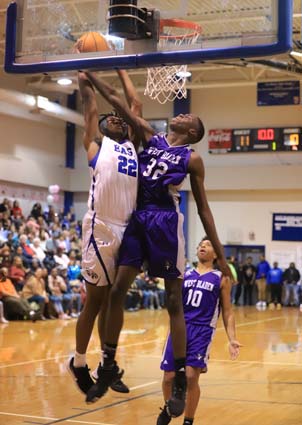 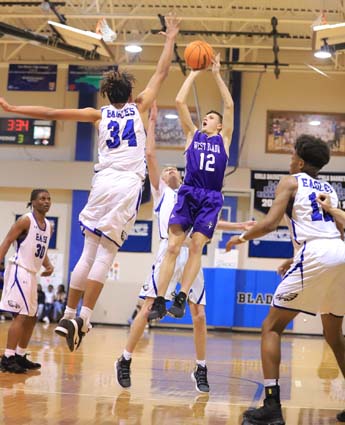 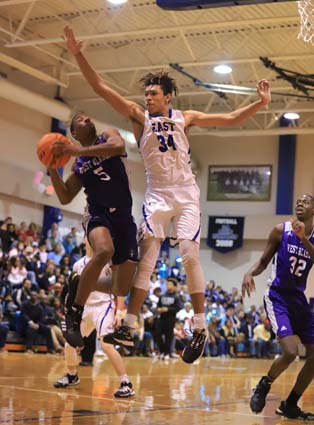 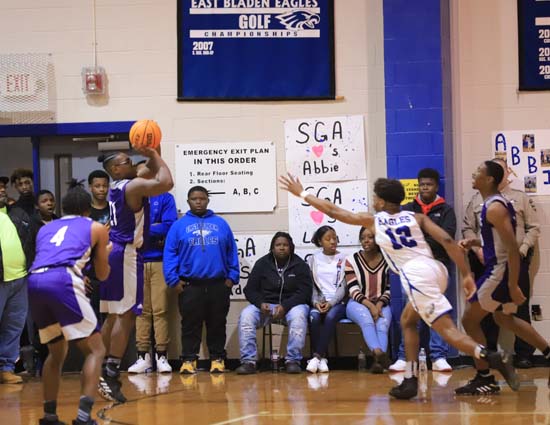 Knight senior Tyre Boykin pulled up for a 6-footer, but McDowell drove for an old-fashioned 3-point play and a 45-36 lead. Boykin scooped in a pair of lay-ups – one after a steal to slice the lead to 45-40 at the 2 minute mark.

McDowell connected on 4 straight free throws, and McKoy made one, while Knight junior ShyRon Adams hit 2 free throws for the Knights.

“The seniors came up big on Senior Night,” said Eagle Coach Aking Elting. “Tayshaun played really well, and Juwan beat the buzzer – twice. Javant had tweaked his ankle in the third quarter, but we taped him up and he came back strong in the fourth quarter.”

Boykin poured in 26 points – 18 in the first half – for the Knights, and Adams finished with 9 points and 5 rebounds.

Berkeley drained an early 3-pointer for the Eagles, but a Boykin free throw and an Adams 12-footer tied the game. Wooten stole the ball and sprinted for a lay-up, and junior Jacob Priest knocked down a baseline jumper for a 7-3 lead.

Adams and Boykin nailed 3-point shots for the Knights, and senior Tra’shawn Ballard pumped in a 16-footer to vault West ahead 11-7. RaSean McKoy answered with a 3-pointer, and McDowell hit a free throw to tie the game 11-11 at the quarter break.

A McDowell lay-up began the second period, but Adams threaded a bounce pass to Boykin for a lay-up. Freshman Malcolm Bolden drilled in a 3-ball, but Boykin responded with a corner 3-ball. McDowell drove to the rim for a basket, but Boykin buried another 3-ball for a 19-18 Knight lead.

RaSean McKoy tied the game with a free throw, but Boykin continued to burn the nets with two more 3-point baskets. Baldwin beat the halftime buzzer with a 15-footer that sliced the Knight lead to 25-21.

McDowell popped in an 8-footer, and Berkeley bombed in a 3-ball from the left wing that vaulted the Eagles ahead 26-25. Adams pumped in a 12-footer, but Wooten buried a 3-ball for a 29-27 lead.

With the victory the Eagles (4-16) secured a berth in the TRC Tournament and will travel to St. Pauls Monday night. The loss concluded West Bladen’s season with a 5-18 record.

“We were right there with them for 3 quarters,” said Knight Coach Travis Pait. “We pressed them to try and get some easy baskets because it is hard for us to play against their length.”

Five Knight seniors ended their high school careers Friday night. “This is a really good group of guys,” said Pait. “They are in the locker room crying because they don’t get to play together as a team anymore.”

Pait continued, “Tra’shawn has been with me since he was 8 years old and we carried him to church. He has really grown. Tyre has just blossomed into a fine young man. Slim (Xayvon Davis) has only been with us one year, but he has really improved. Nijeah has a servant’s heart. He is the glue of this team – on and off the court. Nolan (Bryant) is a great guy – the salt of the earth.”