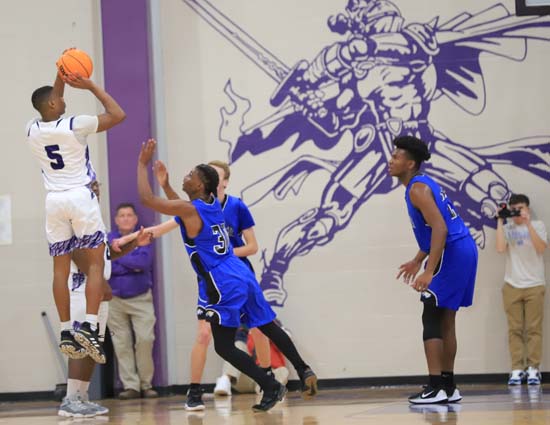 Wooten made his first start at point guard and just missed a double-double with 15 points and 9 rebounds to lead the Eagles. “Freddy did a great job in his first start at the point,” said East Bladen Coach Aking Elting. “That’s the least turnovers that we have had in a game this year.”

“I am so proud of Javant,” said Elting. “He kept his head and had a big game. This was a big win for the whole team. They really played well.”

Senior Tyre Boykin scored all 41 Knight points. “I have never seen one player score all the points before – not in a high school game,” said West Bladen Coach Travis Pait.

Senior Tayshaun Berkeley canned 2 free throws, McDowell dropped in a lay-up and tapped in a rebound, and RaSean McKoy put back a rebound for an 8-3 lead. Boykin bombed in an early 3-pointer, flipped in a floater, then buried 2 more 3-point shots for an 11-8 Knight lead. A pair of Jacob Priest free throws whittled the lead to 11-10 at the quarter break.

Meares and Wooten opened the second quarter with 3-point baskets. Boykin pulled up a for a 17-footer, but Meares drilled in another 3-ball. Boykin popped in a 16-footer and a free throw, but a Meares assist resulted in a RaSean McKoy lay-up and a 21-16 East halftime lead.

A McDowell assist produced a Berkeley lay-up, and Wooten sank 2 free throws and a 3-point shot for a 28-16 lead. A pair of Boykin lay-ups and a free throw was offset by lay-ups from RaSean McKoy and Wooten.

Boykin delivered a 3-ball and 2 free throws to narrow the lead to 33-27, but 2 lay-ups and a free throw by RaSean McKoy pushed the Eagle lead to 38-27 at the third quarter break.

Priest hurled in a runner to start the fourth period, but Boykin banked in a runner and tossed in an 8-footer and a free throw to close the gap to 40-32. Senior Juwan Baldwin drove for a lay-up, but Boykin responded with 2 free throws and another 3-ball to keep the margin at 45-37 with 3:12 remaining.