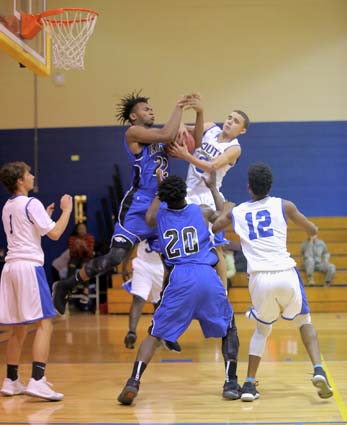 The Eagles trailed 49-43 after 3 periods, but Smith muscled in 4 baskets and made a free throw, and senior Messiah Leach tossed in a basket and sank 4 of 4 free throws to key a 22-9 closing rally that produced the win.

Adonis Avery threw in a pair of baskets, freshman center Javant McDowell dropped in a basket, and junior Keshaun Davis hit a free throw during the winning Eagle rally.

“We really needed the win,” said East Bladen Coach Kenzil McCall. “Sincere started very strong for us and had a monster game on the boards.”

Jaleel Lesane’s tallied 7 first period points as the Mustangs edged ahead 14-12. Smith nailed a 3-point shot, powered in 2 more baskets and cashed in 2 free throws for East in the quarter, and Avery buried a 3-point shot.

Avery drained a 3-point shot and another basket for East in the second period, and Messiah Leach buried a 3-point shot. Smith and senior Deondre Newkirk banged in a basket and a free throw each. Junior Bryon Bowen added a basket.

Smith fired in a 3-pointer, another basket and a free throw in the third quarter for East. Avery knocked down another 3-point shot, and Davis, McDowell and Messiah Leach contributed a basket each to keep the Eagles within 49-43 at the quarter break.

Avery totaled 15 points for the Eagles, and Messiah Leach finished with 11 points. Jaleel Lesane led the Mustangs with 18 points, and Werrell followed with 16 points.

It was the third conference win for the Eagles and their fifth overall win. East Bladen will travel to East Columbus Friday night.