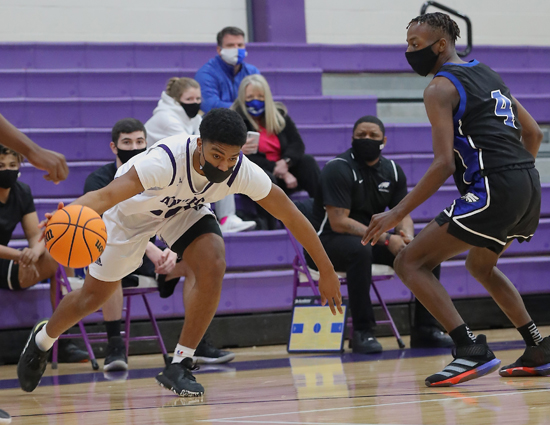 Bolden poured in 19 of his 29 points in the 1st half and McDowell popped in 17 of his 21 points as the Eagles built a 51-38 halftime lead. McDowell also posted a double-double with 10 rebounds. 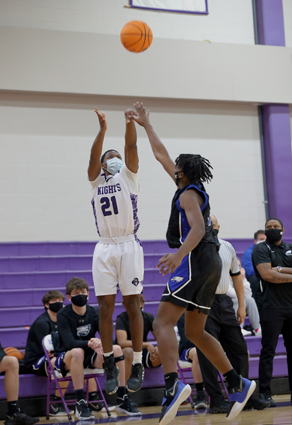 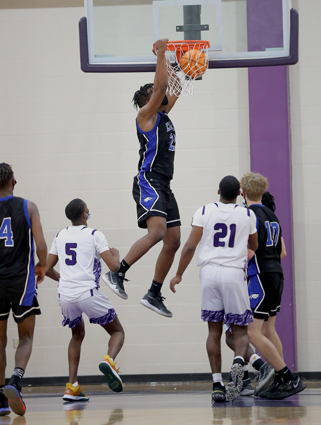 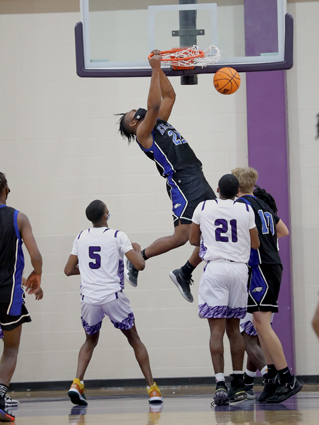 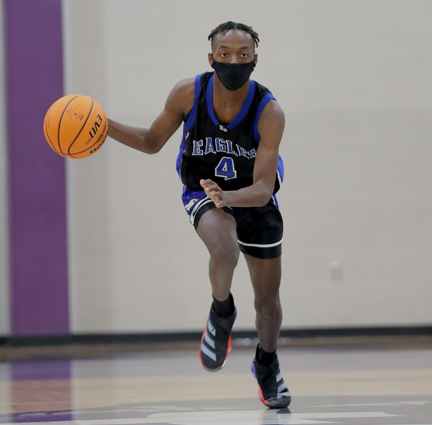 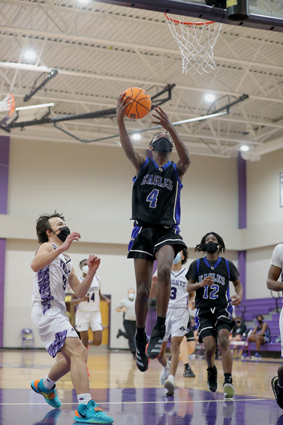 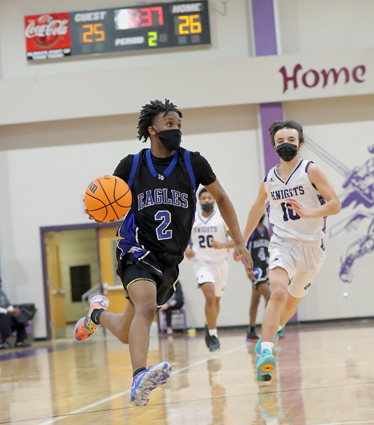 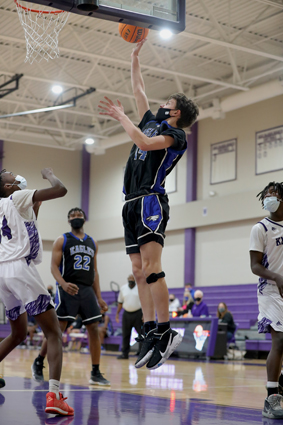 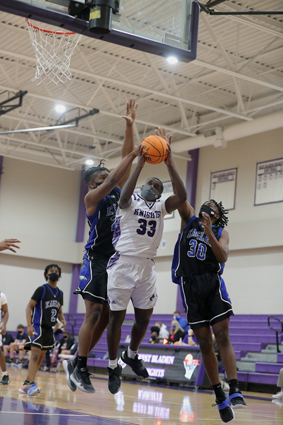 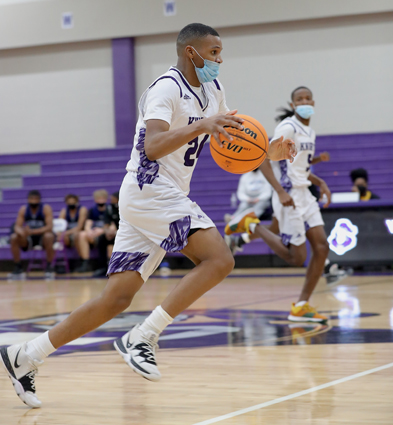 The Eagles were without 3 players Saturday (2 were taking a Covid pause because they also play soccer and one had left the team) and dressed 5 players who were up from the jayvee team. Another problem was 4 different East players had 4 fouls in the 2nd half.

“The story of our life this season,” said East Bladen Coach Aking Elting about the foul trouble. “We try to focus on going forward and build on this despite missing a good number of points that weren’t there tonight. We did a good job of keeping guys in the game – only one fouled out.”

McDowell powered in a trio of early baskets, but sophomore Gary Parker hit 2 free throws, senior ShyRon Adams bombed in a 3-ball and sophomore Deonte Lacey muscled in a lay-up off of an assist from freshman Andre Moore as West grabbed a 7-6 lead.

Sophomore Zamar Lewis netted a free throw, and Bolden raced for 2 lay-ups for East, but West answered with a trio of lay-ups as steals by Josiah Brown, Adams and Moore resulted in a lay-up for Josiah Brown and 2 lay-ups for Adams that kept the Knights up 13-11.

Jacob Nixon dropped in a lay-up for the Eagles, but an Adams follow shot and 2 free throws from Keshawn Ballard gave West a 17-13 lead. Senior Charles Brown and junior Nazir Smith drove for lay-ups, and McDowell hammered in a dunk for a 19-17 East lead.

Adams drilled in a 3-ball for a 20-19 Knight lead, but lay-ups by Smith and Bolden vaulted East in front 23-20 at the quarter break.

Three-point bombs from Adams and freshman Landon Stanley were offset by East lay-ups from McDowell and Nixon. A pair of Anthony Mitchell free throws pulled West to within 29-28 at the 5:57 mark.

Bolden nailed a 3-ball and dashed for a lay-up. After a Javonta Matthews free throw, McDowell threw in a pair of lay-ups for a 39-29 East lead. Matthews responded with a lay-up off of a Josh Lewis assist then hit 2 free throws that trimmed the margin to 39-33.

McDowell began the 2nd half with a rebound basket, but a Parker foul shot and a Josiah Brown follow shot kept the lead at 53-41. Bolden flew to the basket for 4 lay-ups, and Nixon flipped in a lay-up as the Eagle lead grew to 63-42.

Josh Lewis and Mitchell hit free throws and Adams buried a 3-point shot then drove for a lay-up to whittle the lead to 63-48. Smith tossed in a follow shot, but Stanley delivered another 3-ball, and Josh Lewis sliced the lead to 65-53 with a lay-up. A pair of Charles Brown foul shots and a Nixon lay-up pushed the East lead at 69-53 at the quarter break.

Bolden’s runner started the final quarter, but Parker turned a lay-up into a 3-point play then muscled in a rebound. A Matthews lay-up brought the Knights to within 71-60. After a Zamar Lewis rebound basket, a Josh Lewis free throw and 2 free throws by Matthews were followed by an Adams transition lay-up that closed the gap to 73-65 with 4:29 left to play.

Eagle lay-ups by Zamar Lewis and Smith were answered by a pull-up 10-footer and a free throw from Adams and a Matthews lay-up that sliced the lead to 77-70 with 1:36 on the clock.

Nixon ignited a 10-3 Eagle closing spurt with 2 free throws and a lay-up, and McDowell added a lay-up. Adams sank a free throw then sent an assist to Matthews for a lay-up, but Charles Brown converted 4 straight free throws for the final margin.

“We are looking for big things from Jacob to be part of the good returning nucleus that we have here,” said Elting. The Eagles finished their season with a 6-5 record.

Adams fired in five 3-point shots and topped the Knight scoring with 29 points. Matthews recorded a double-double of 13 points and 12 rebounds. Parker followed with 8 points and 5 rebounds. Josiah Brown and Stanley scored 6 points each. Josiah Brown grabbed 5 rebounds and Mitchell and Lewis snared 4 rebounds each. Lewis was credited with 5 steals.

“I though we played good enough to win,” said Knight Coach Travis Pait. “But every time we got close we had a really bad turnover that set us back. I am proud of our guys. We were competitive this year, and we cut their lead to 7 late in the game.”