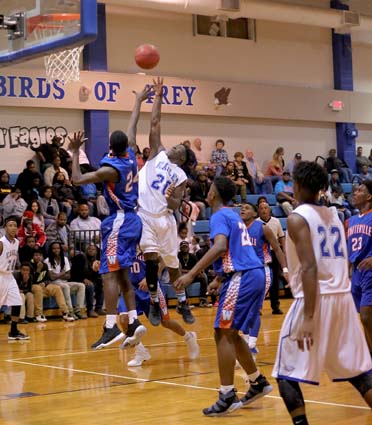 Senior Adonis Avery bombed in a pair of 3-point shots, and Messiah Leach nailed a 3-pointer as the Eagles took an early 9-7 victory. Teammate Deondre Newkirk dropped in a transition lay-up to keep the lead at 11-9, but Tyjuan Anderson’s 3-pointer vaulted Whiteville ahead 14-12 at the quarter break.

Moss connected on a pair of 3-point shots and banked in a follow as the Wolfpack stretched their lead to 30-16. Jatiek Martin beat the halftime buzzer with a follow shot to keep the Whiteville lead at 32-19.

“We started the game with plenty of energy and seemed to find a rhythm in the first quarter,” said Eagle Coach Kenzil McCall. “Then we started turning the ball over. We can’t do that. We can’t make up those possessions.”

Avery buried a 3-point shot and sank 2 free throws to start the second half. Leach fired in two more 3-point shots, and senior Sincere Smith threw in another 3-ball as the Eagles pulled to within 38-33 with 3:21 left in the quarter.

Phillip Powell banked in a follow, and Anderson hit a banker for the Wolfpack. An Avery pass resulted in a Byron Bowen lay-up that kept East within 42-35, before Anderson and Cameron Smith sank 3-point shots that pushed the margin to 49-35 at the quarter break.

Avery nailed a pair of 3-point shots to begin the final period that cut the lead to 49-41. However a flurry of Eagle turnovers sparked a 9-2 Wolfpack spurt that widened the gap to 58-42.

Sincere Smith canned 2 foul shots, freshman Javant McDowell muscled in a rebound, and Avery pumped in another 3-pointer to pull the Eagles to within 60-51 with 3:10 left to play.

An Anderson lay-up and two follow-shots by Powell pushed the lead back to 66-53.

“We can get better and we have to,” said Coach McCall. “We have to cut down on the turnovers and shoot better on free throws. I was pleased with the freshman (McDowell). He stepped up and held his own in his first varsity game. It is a big jump from middle school to varsity.”

McDowell finished with 6 points and a team-high 15 rebounds. Avery led the Eagles with 21 points. Leach racked up 14 points, and Sincere Smith added 10 points and 7 rebounds.

Moss led the Wolfpack with 15 points, and Richardson and Powell netted 13 points each. Anderson totaled 10 points.

It was also the season-opener for the Eagles who will host South Columbus Tuesday night.