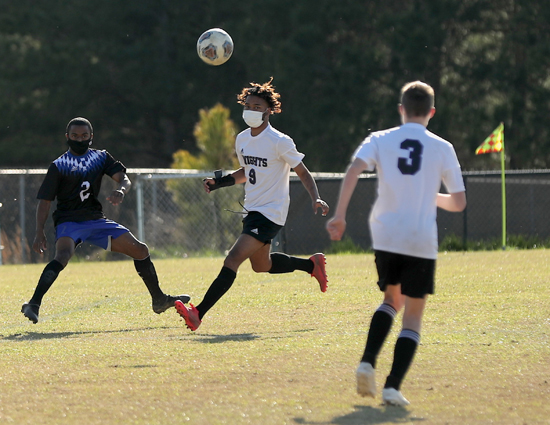 ELIZABETHTOWN – Senior Garrett Melvin fired in 2 goals to lead East Bladen to a 6-0 boys soccer victory over West Bladen on a Joint Senior Night for the 2 schools Thursday night.

Melvin opened the scoring in the 3rd minute with a goal off of a feed from senior Will Hester. A minute later freshman Zac Metz sent a pass to freshman Jamie Delgado who knocked in the goal for an early 2-0 lead.

“Garrett had a strong performance tonight,” said Eagle Coach Jay Raynor. “Zac Metz and Jamie Delgado made their first starts tonight. They both did a lot with the time they had.”

Melvin found the back of the net with an unassisted goal in the 6th minute then delivered an assist to junior Ishmael Arteaga who banged in the goal that pushed the lead to 4-0 in the 13th minute.

“Will adjusted well to a holding midfield role that he hasn’t had to play this year, noted Raynor. “He helped distribute the ball and initiate our attack. Garrett had some nice combination play with Ishmael. It was his first game back from injuries and he also made a difference. Ishmael is calm on the ball and able to get out of spaces with the ball. He combined well with our forwards and midfielders tonight.”

Junior Chase Starkloff raced to the net for an unassisted goal in the 30th minute as the Eagles built a 5-0 halftime lead.

Sophmore Malcolm Bolden closed out the East scoring 11 minutes into the 2nd half as he converted an assist from Delgado into a goal for the final 6-0 margin.

“Malcolm played 40 minutes after coming from his grandmother’s funeral,” said Raynor. “It says a lot about him and what he thinks of his teammates and of the game. He got right in and was smooth as Malcolm is. He made some solid passes and had some nice shots on goal.”

Raynor credited Sal (Algozy) for “serving some amazing balls into our attacking 1/3 as well as on corner kicks, We didn’t do the best at covering those served balls in but he put them on a platter for us.”

The Eagles outshot West 26-0 as senior Jacob Priest recorded his 6th shutout in goal. “Jacob didn’t have to make any saves but did well with his distribution when he was involved in the play. “Jay (McKoy), Freddy (Wooten), and Chase did a good job of joining our attack tonight. All contributed to the attack getting forward. Chase made a great tackle on a mishap that could’ve resulted in a goal.”

The Eagles filled in some gaps with some younger players. “Freshman Stephen Matheson played quality minutes for us in midfield,” said Raynor. “Freshmen Lafon Monroe and Blaine Pope got quality minutes and made impacts. Both made some nice runs to the back post following up shots. Both were right on the brink of scoring. Their time is coming and they will be difference makers.”

“Nathan Howell as well as Jair McElveen were solid as usual,” noted Raynor. “Both did a great job when they were in the game. Although they didn’t play as much as I had hoped for together they still got quality minutes with our seniors. Jackson (Bostic) did a phenomenal job keeping us organized during our substations.”

“We didn’t play to the level of what we are capable of but got the result,” said Raynor. “A lot goes into Senior Night both physically and emotionally. I thought West handled it much better than we did. The score line doesn’t reflect how hard they played and defended. Their keeper made some tough saves and their back line did the same.”

Raynor praised Coach Cesar Gonzalez and his Knights, “The first few minutes went our way but Cesar did a heck of job getting them ready for the second half. That’s a young group he has and they dug in and defended with all they had in the second half. We weren’t ourselves and most definitely went away from doing what we do. The score isn’t indicative of how either team played. West out worked us and had more fight than we did.”

“Our guys had some solid passing sequences and made runs off them, but we would go long times without those things happening,” noted Raynor. “Individually some good things happened but we weren’t moving together or within our system. I will give credit to West and their tactics. They dropped off us a good bit and kept us in front of them.”

Raynor continued, “I’m assuming that was to negate our speed. That gave our guys a sense of space to take when actually we were just cramming 21 players into a 60 x 60 yard box. There was no space to take and we were essentially running into a wall of defenders and crowding our own space to pass and make runs into. All facets of the game for us were flawed tonight. All are fixable and we will get them ironed out before Monday.

“Tonight was special and being able to have a combined Senior Night with West made it even more special,” stated Raynor. “Cesar and their players were grateful and expressed their gratitude multiple times on the night. I’m glad we could do this together and for each other. I’m glad Jackson (Bostic) thought of it and was able to get our soccer parents on board.”

Knight seniors are Albert Reyes, Brayan Morales and Luke Gustafson. “I would like to congratulate our seniors,” said Knight Coach Gonzalez.

Raynor added, “This group of seniors have worked extremely hard over their four years. All have been with the program for four years. They have paid their dues and have put a lot of blood, sweet, and tears into our program. They have been successful but have had to work at it twice as hard as anyone else. I’m beyond proud of them and thankful that God put them and their families in my life. I can’t wait to see what the future holds for these fine young men.”

The Eagles improved to 6-0 and will travel to Red Springs Monday for a 4:30 game. West Bladen will visit East Columbus Monday at 3:30.