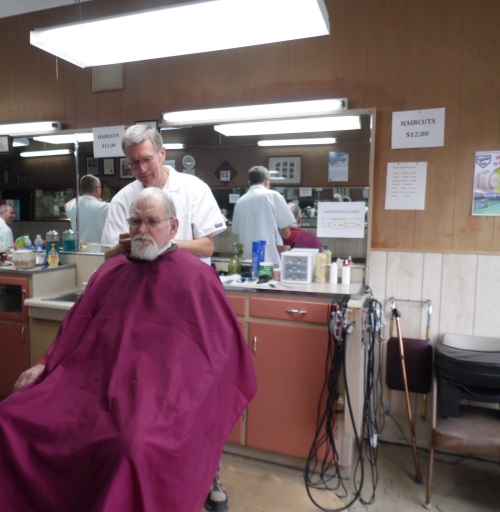 Back when Johnson was president, the cost of a stamp was .05 cents, and Boston defeated the LA Lakers in the NBA Championship, Mr. Dennis Hawes, a seemingly quiet man, began his career that would span the next 50 years.  This month Bridgers Barber and Beauty Shop celebrates, Hawes, a talented, hard-working, and dedicated barber.  Hired in January of 1965, right out of Barber School, Hawes joined Bridgers’ shop.  Hawes has been at the same chair since then making the world look better one cut at a time.

Bob Cole a long time customer of Hawes says, “This is a fine man right here, a good Christian, husband, father and friend.  I’m proud to say he is my friend.”  Cole continues saying, “Dennis has more friends in Elizabethtown than anyone.  Everyone respects him and likes him.”

Hawes enjoys his job.  When asked what he liked most about it, he explained, “There is always something new.  You think you’ve seen it all and then you see something new.”

The owners and co-workers at the shop compliment and tease Hawes.  Mike White, says, “He keeps us laughing, that’s what a lot of people don’t know about Dennis.  He always has something funny to say.”  Russ Bridgers adds, “He keeps things pretty interesting at times.  He is a good employee.”

When asked if retirement was in his near future, Hawes said, “I have to work until I fall over.  Barbers don’t retire.”  One thing is for certain, Bladen County is a better looking place because of Hawes dedication and service.   If you would like to congratulate Hawes, stop by and see him at 114 South Poplar Street in Elizabethtown.