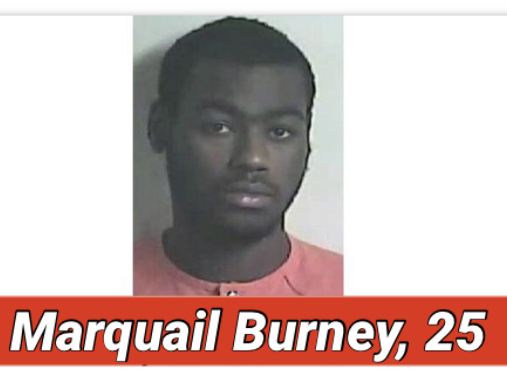 Burney Pleads Guilty to Murdering Father’s Girlfriend, Sentenced Up to 38 Years in Prison

ELIZABETHTOWN – Marquail Burney, 25, of Bladenboro, entered guilty
pleas to second degree murder, robbery with a dangerous weapon, and felony larceny on Monday morning in Bladen County Superior Court. Following entry of the plea, Burney received a sentence of 364 to 461 months in the North Carolina Department of Adult Correction, according to a press release distributed by District Attorney Jon David’s office.

On the evening of October 13, 2015, authorities with the Bladen County Sheriff’s
Office were called by Burney’s father, who reported that his girlfriend, Crystal Cruz, was missing. Burney’s father later located blood-stained items, including Cruz’s cell phone, in an utility building on the property and confronted his son about what happened to Cruz. In response, Marquail Burney fled from the home on foot.

Upon arrival and a search of the property, deputies located Cruz’s body in the trunk of a vehicle near the home. She had been shot in the cheek, chest, arms, and legs and was pronounced dead on the scene.

While conducting the crime scene investigation, authorities were alerted that a 2004 Honda Odyssey had been reported stolen from a nearby residence which law enforcement believed was taken by Burney. On the morning of October 14, 2015, the stolen van was located in the parking lot of a Wal-Mart in Lumberton.

Deputies with the Bladen County Sheriff’s office arrested Burney there without incident. He was transported to the Bladen County Jail. During a subsequent interrogation, Burney acknowledged that he was responsible for Cruz’s death. Burney told investigators that he was unhappy with Cruz and shot her multiple times as she sat on the couch, according to the District Attorney’s ofice. He then took Cruz’s cell phone and disposed of her body in the trunk of her vehicle.

Burney received a sentence of 300 to 372 months on the second degree murder
conviction and an additional 64 to 89 month sentence for the robbery of Cruz’s cell phone and the larceny of the van. The two sentences will be served consecutively. In total, Burney will serve a minimum of 30.3 years and a maximum of 38.4 years in state prison, according to the District Attorney’s office.