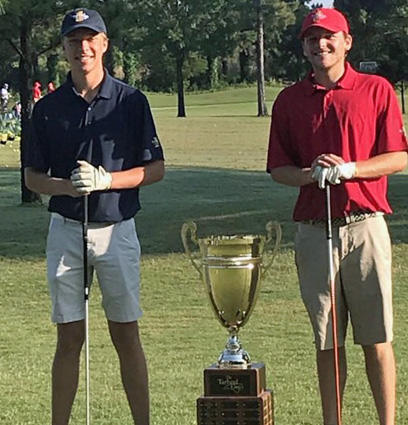 Elizabethtown’s Cade Hancock played a key role in the East team’s victory over the West in the 4th Annual Tar Heel Cup then earned NCISAA All-State honors with a fourth-place finish in the state tournament.

The Tar Heel Cup pits teams of the best golfers from throughout the state against each other in a Ryder Cup-style format. Each team is composed of six male and six female golfers. Each male golfer is paired with a female teammate for the first two days in alternating shot and four-ball matches.

The Tar Heel Cup was played at River Landing in Wallace. The East won the event by a margin of 15 points to 9 over the West team. Hancock and his female playing partner from Fayetteville, who is a UNC Pembroke signee won their opening matches.

In Sunday’s singles finals Hancock fired a 31 on the front nine to go six holes up on one of the West’s top player, then closed out the match on No. 14 by a 5&4 margin.

On Monday, Hancock traveled with his Harrells Christian Academy Crusaders golf team to the NCISAA Class 2A State Golf Championship at the Country Club of Whispering Pines.

The Crusaders finished second in the state with a team score of 474 behind the O’Neal School of Southern Pines, who posted a 447 total. O’Neal’s Fulton Smith won the individual championship with a 140 total. Hancock finished fourth in the state with a 151 total and was named All-State along with Harrells’ teammate Colby Stoppelbein who carded a 148 to finish in third place.