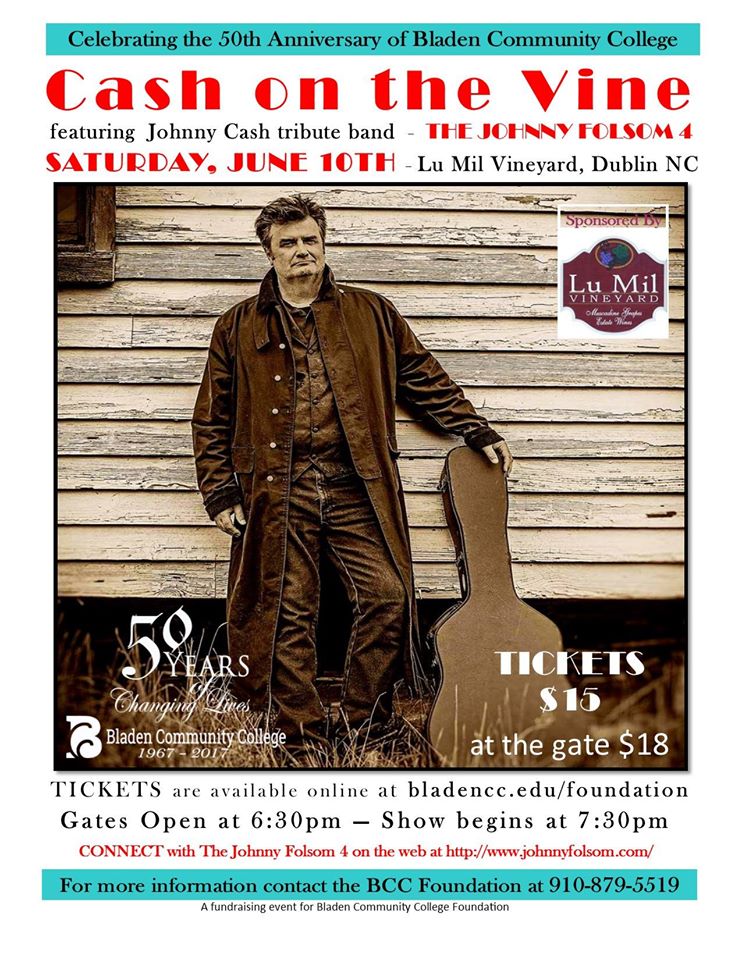 Cash on the Vine set for Saturday

Many folks can recall growing up to the strains of such songs as “Ring of Fire” and “Folsom Prison Blues” playing on the radio. The Johnny Folsom 4 will bring those songs and other Johnny Cash favorites back to the stage for the evening.  Tickets are available online at  www.bladencc.edu/foundation. You can also enter for a chance to win free tickets. To learn more about the contest, click here.

She added everyone is looking forward to Saturday’s concert. “I’ve been working for three years to bring this band here, so I’m excited that they are coming,” said Linda Burney.

The Johnny Folsom 4 is a Johnny Cash tribute band based in Raleigh, according to David Burney who is the band’s lead singer and guitarist. He said the band was formed about 8 years ago and they have traveled and played venues from New York to Nashville and throughout North Carolina. Some of the venues the band has played include the Haw River Ballroom, Lakeside Lounge, Pour House (Raleigh), Lincoln Theater (Raleigh), Deep South the Bar, the Cary Theater and the 5 Spot.

The band plays a variety of Cash’s large library of songs. When asked which Johnny Cash song is his favorite to play or sing, David Burney said, “I love them all.” He said by far his utmost favorite is Big River as it showcases not only Johnny Cash’s songwriting skills but is also a great example of poetry.

The Johnny Folsom 4 is made up of David Burney who serves as vocalist and guitarist, Eleanor Jones who serves as a vocalist and covers June Carter Cash, David Gresham who playas guitar, Randall Benefield who plays the drums, and Tom Fields who plays bass. The name of the band pays homage to Johnny Cash in several ways. David Burney said the word Johnny is for Johnny Cash, the word Folsom pays tribute to Johnny Cash’s song Folsom Prison Blues, and the number 4 honors the name of Johnny Cash’s band Tennessee 3.

Johnny Cash wrote an extensive library of songs. David Burney said there are known to be more than 1,500 songs attributed to Johnny Cash.  When asked about the music itself, he said, “There is a timelessness about it.”

David Burney added there a number of songs which people love to hear such as “Boy Named Sue” to “Ring of Fire.”

Burney, who grew up in Leland, has deep Bladen County ties. His grandparents were from Clarkton and Elizabethtown, his mother was from Carver’s Creek and his father was from Horseshoe Swamp.

“I remember being a child and going to Melvin’s to get a cheeseburger or going to Clarkton with my grandmother,” said Burney. He said he was looking forward to Saturday’s event at Lu Mil Vineyard.