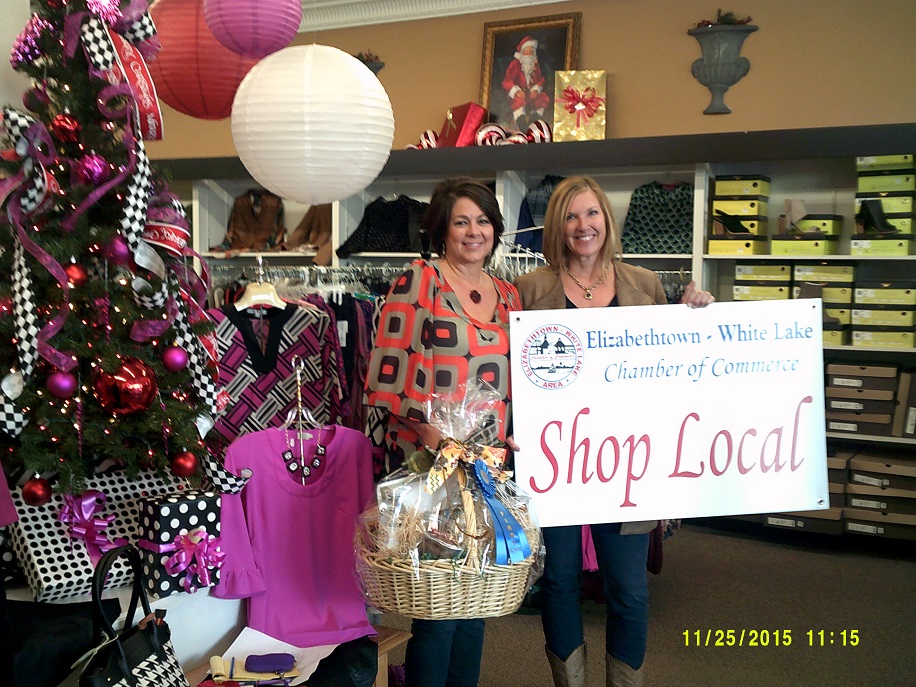 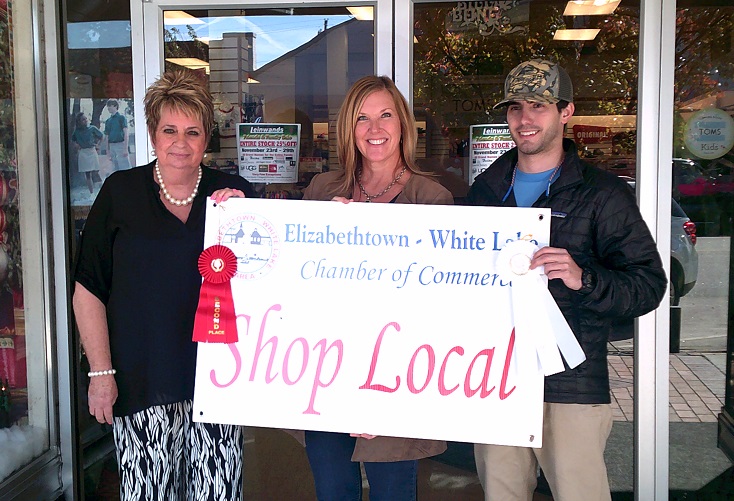 The winners of the Elizabethtown-White Lake Area Chamber of Commerce Holiday Display Contest were announced on Wednesdaymorning. The first place winner was Fisher’s Ladies Shop with a theme of “Fisher’s Frock Farm.”
The winner received a first place ribbon, a gift basket, articles in the local media, and two free lunches and will be recognized at the next Chamber luncheon meeting.
“It’s an honor to be selected,” said Karen Suggs of Fisher’s Ladies Shop.
She added that she begins researching and planning her holiday display in August and September.
“They’re fun and I like doing Christmas windows,” said Suggs.
She added that it was fun to watch all of the merchants as they began to decorate and create their holiday displays.
The second and third place winners were Leinwand’s Department Store.  The second place winner was Leinwand’s of Elizabethtown Ladies window with the theme of “Small Town in a Small Town.” The third place winner was
Leinwand’s Men’s with a theme of “Miracle on Broad Street.”
Other entries were Fisher’s Mens Store with a theme of “Trolling for Santa”; Lu Mil vineyard with a theme of “Lu Mil’s Merry Muscadine Christmas”;  Fowler’s Jewelry Store with a theme of “Sparkling Christmas decorated by Whimsical Florist; and Global Realty with a theme of “Home for the Holidays” decorated by Whimsical Florist.
The Bladen Journal, Chamber of Commerce and Whimsical Florist also participated but were not judged due to the affiliation with the Chamber’s Board of Directors, said Chamber Executive Director Dawn Maynard. Maynard said that she was pleased with the number of participants based on this being the first year of the contest. She said there were 10 entries in the contest and seven were actually judged.
Contest entries were judged based on creativity; promoting the store’s merchandise; uniqueness; promotion of the holiday season;  the ability to entice you into shopping in their store; the theme’s WOW factor in both the daylight and at night.
“The contest was designed to encourage merchants to decorate their store front windows and entrances for the season to entice shoppers to ‘Shop Local,’” said Maynard.
She said Small Business Saturday will be recognized this year on Saturday, Nov. 28, and Maynard said the Chamber wants to encourage the community to shop locally and support the merchants in their community.
Share on Social Media using Short Link: https://bladencounty.org/?p=34643
Tags: Chamber announces winners of Chamber of Commerce Holiday Decorating Contest