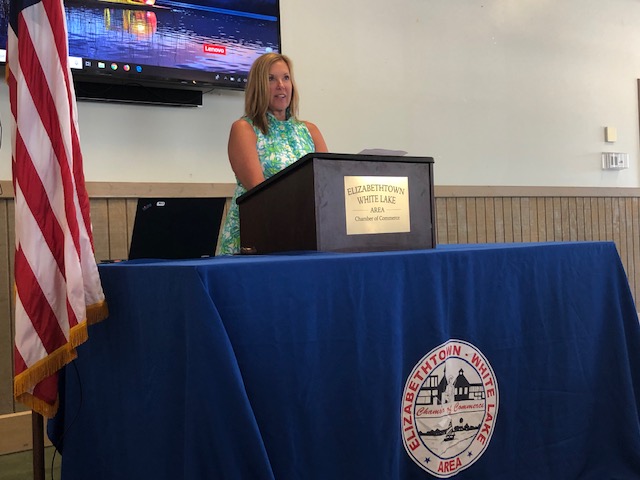 Today was officially the last luncheon for Dawn Maynard, as the Executive Director of the Elizabethtown-White Lake Area Chamber of Commerce. Around 35 business leaders were in attendance.

The group voted on new incoming chamber board members. Mrs. Maynard announced Jake Womble with Goldston’s Beach at White Lake and Lauren Godwin with Sharonview Credit Union in Tar Heel were the two nominations for the new board positions. Those in attendance voted unanimously to accept the two nominations as board members starting in July during the next fiscal year.

Hurricane Florence significantly damaged the dam at Greene’s Lake, the soil at Elizabethtown Cemetery, and caused flooding at Tory Hole Park and Lock & Dam #2, according to Madden’s report. However each site has either received repairs with FEMA funding or the town is working with FEMA to fund the needed repairs at each location. 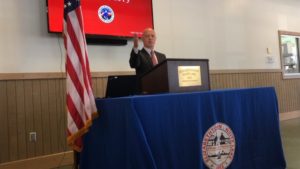 Madden presented a chart showing Bladen County in an Employment Growth Decline. He stated Employment growth is a challenge for many rural counties.

Madden said, “The small towns that survive will be the ones that are open to new ideas.” 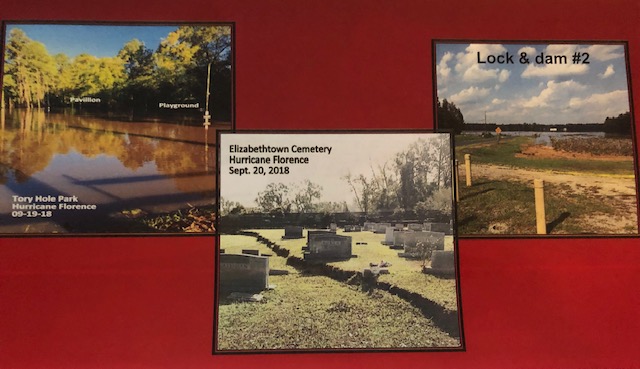 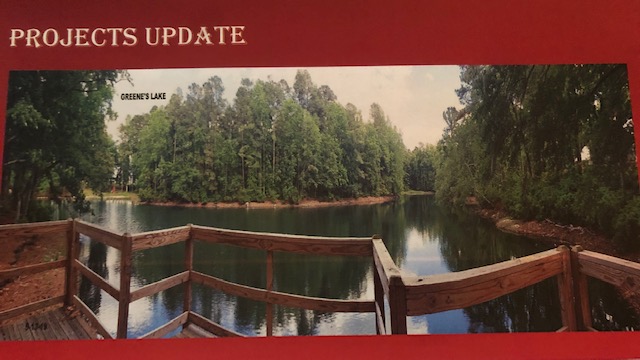 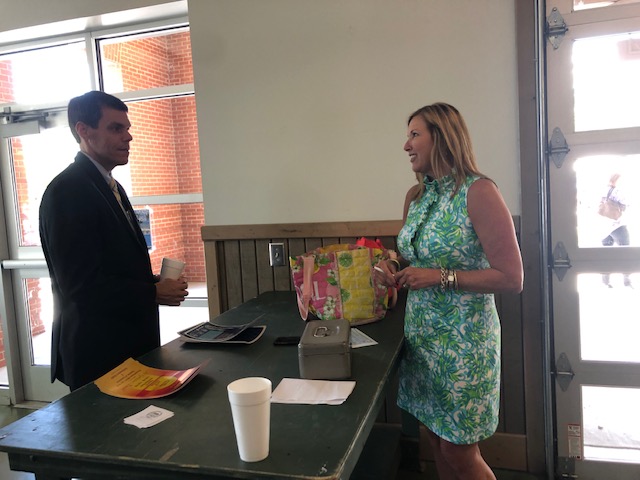 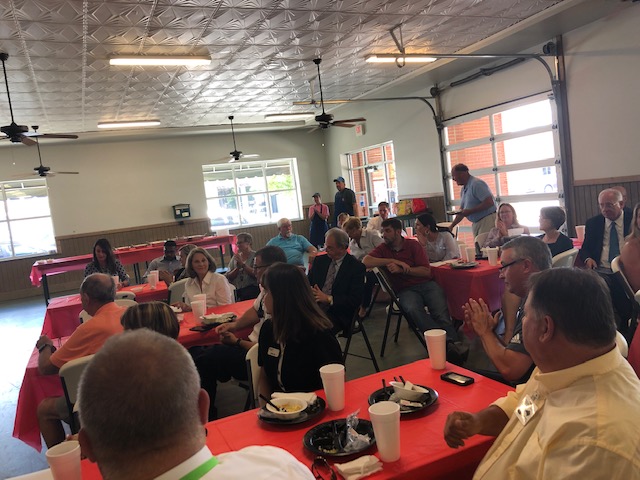 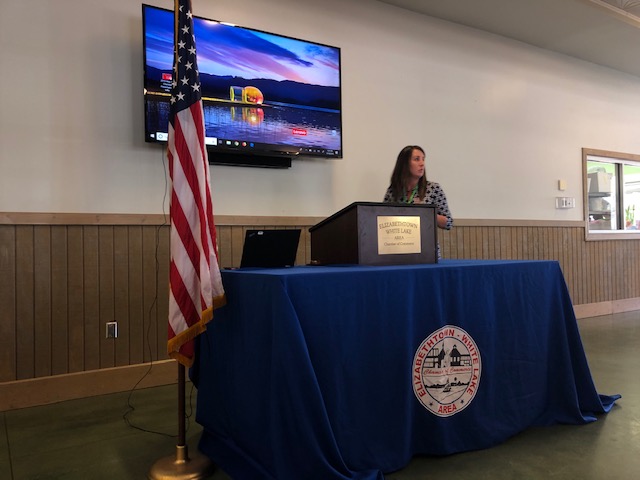 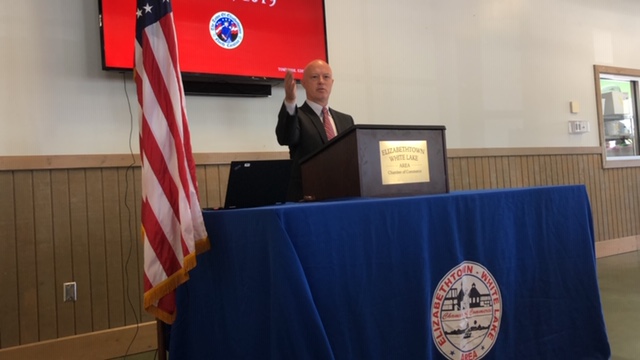 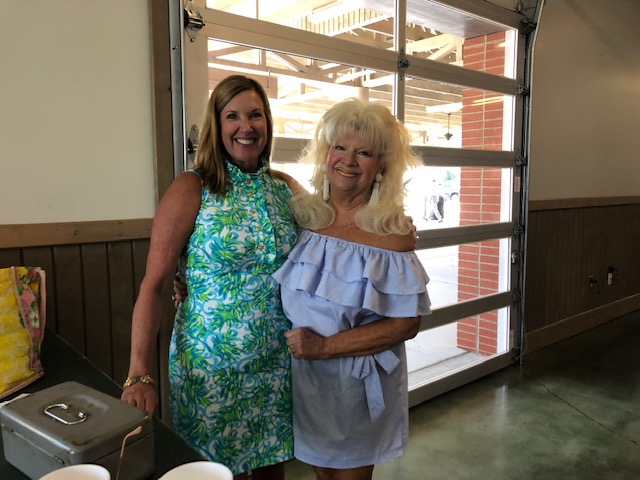 The Elizabethtown-White Lake Area Chamber Board met with Madden before the luncheon on Tuesday to discuss a new marketing strategy, Madden reported.

“We need to control our message,” Madden explained.

The decision to hire a full time Marketing Director for the Chamber was approved at the morning board meeting to help with the new strategy, Madden said.

Maynard announced her resignation in April. She offered to stay on part-time to make the transition smoother for her replacement and to work on the two summer concert series. Maynard stated today the Board is accepting applications for the new position.

Mayor of Elizabethtown, Sylvia Campbell said, “We are sure going to miss her. She has always done a wonderful job.”

In an earlier interview Maynard said, “It’s a very bittersweet time in my life.”

Many in attendance talked about Maynard’s hard work and dedication. Since taking the Executive Director position, the Chamber has hosted many festivals, concerts, banquets and other local activities.

Chamber members are bragging about Maynard’s many successes during her tenure as the Executive Director. The monthly lunch meetings have grown by more than double. Elizabethtown and White Lake now have summer concerts  drawing in large crowds each year. Last but not least, the chamber has an Ambassador Program due to the leadership of Maynard and her willingness to partner with area leaders and business owners.

“We are so grateful for all that Dawn has done for our community. We have some great shoes to fill,” said Chamber President Ashley Dowless.

Maynard did make a few announcements before closing the chamber lunch meeting for the last time.

There will be a ribbon cutting ceremony on Thursday this week from 4 pm until 6 pm at Tar Heel Fish House on Highway 87 in Tar Heel.

The White Lake Water Festival will kick off Friday evening with a street dance at Goldston’s Beach. On Saturday the festival will continue with a parade, car show and vendors.